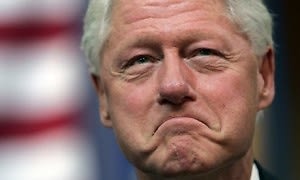 "You say it's your birthday...it's my birthday too..." It's Bill Clinton's big day today. And to celebrate his sixty-four years of life, he's partying in the Hamptons. Because that's what any respectable ex-president of the United States would do.

According to The Post, Doug and Lily Band (longtime aide of Mr. Clinton) will be hosting a party for the second-youngest elected president at their Watermill home. Naturally, Secretary of State Hillary Rodham Clinton will be cohosting; Almond executive chef Jason Weiner is catering.

Wow Mr. Prez, way to upstage Team GofG...the best we could think up was champagne and sparklers at RDV...