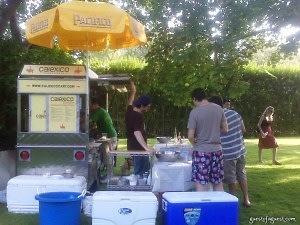 [The Calexico Cart trades Prince St for the Tanteo Yard]

Three brothers, Jesse, Brian, and David Vendley; hailing from Southern California, became obsessed with bringing high quality Cal-Mex cuisine to the streets of NYC.  Welcome the Calexico Cart.  Their food is made from scratch with only the freshest ingredients.  They were named one of the top three food carts in NYC at the Vendy Awards and can be found in Soho on the corner of Prince & Wooster streets between 11am and 4pm.

So, you can imagine my delight when I spotted the Calexico Cart at the Tanteo House party last weekend.  Looks like the brothers are willing to make a LONG journey east for their most valuable customers.

Paired with Tanteo's fine tequila, this was quite the Saturday afternoon treat!