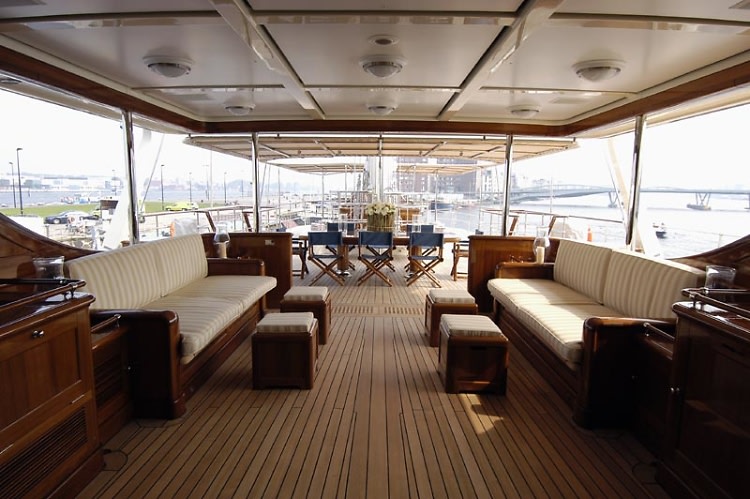 [Aboard Athena. Photo via Yacht Forums]

Go HERE for more photos of this Yacht.

Does anyone personally know Jim Clark?  Can you make an introduction?  I.must.have.his.boat....someday.

She stands tall and proud; a testament to today’s technology and yesterday's splendor. She’s Athena; goddess of the sea… and the most significant splash since the Gemini orbiter fell to earth. She's not only the world's largest privately owned sailing yacht, but she has single handedly resurrected the golden age of sail, while capturing the imagination of mariners worldwide. [Yacht Forums]

The interior is gorgeous too. I love the symmetry in the photo above.  Definitely some good Fung Sei taking place. "With only 20 knots of wind filling her sails, Athena heels at 10 degrees and cruises leisurely at 14.5 knots. With the topsails unfurled, she will gain another 1.5 knots. When the wind reaches Force 5, she's capable of 18.9 knots." I want to sail the world in Athena. Who's joining me?

"Athena's Alustar-aluminum hull and superstructure, adorned with teak and mahogany, give rise to three soaring 61-meter gaff-rigged masts. Athena spans some 289 feet in length, over 36 feet in beam, displacing over 1000 tons and stretches four years of spirited teamwork. Combining the unique talents of Pieter Beeldsnijder (exterior and interior design) with the naval architectural skills of Gerard Dijkstra & Partners, Athena is the culmination of their talents and the artistically endowed at Royal Huisman. A virtual dream-team of sorts, that has shaped the sails of yachting history."

Things We Love• the dangerous book for boys• Athena