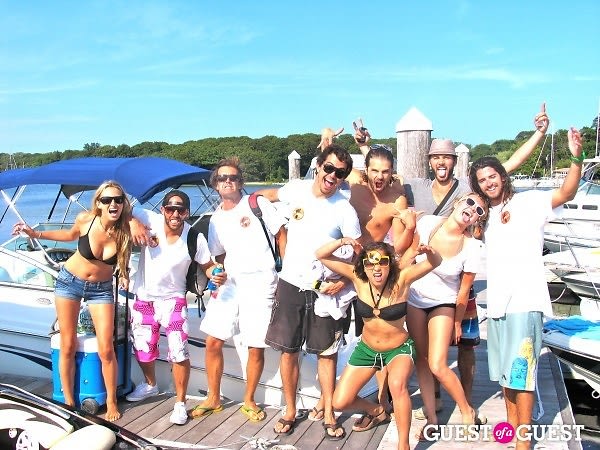 Go HERE For More Photos by Samanta Kantor from Wakesurfing with 41 North!

Though tanning on the beach and drinking a lot on the deck is fun, it can get old. So yesterday we decided to go balls to the wall and head out with 41 North Board Corp on their (amazingly tricked out) boat for some wakesurfing, wakeskating, and other things you thought you couldn't do in the water. -

41 North Board Corp is located in Sag Harbor at...yep...41 degrees latitude. Aside from their clever company name, Roger Kunsemueller and Jeff Skulnik, the dynamic duo of 41 North, provide an amazing experience out on the water with all kinds of extreme watersports for beginners and experts alike. Roger, a native of Germany, has been in the Hamptons since 2000, but just this year has achieved the pleasure of being his own boss at 41 North. He's all about connecting these types of active and exciting sports with figuring out what you're made of as a person, and pushing yourself to your limits. Well, we tried, at least.

Jeff, who lives in South Florida year-round but spends his summers on Long Island, has been competing and coaching in wakesports since childhood. He's all about teaching, and really makes it possible for even first timers (like us) to succeed, a reward of the job that never gets old. 41 North offers wake camps and private instructions (we were told of one guy who goes wake surfing everyday from 6:30am-8:30am..now THAT is dedication), and of course you can just reserve the boat for a day with all your friends and try the works!  Make sure you ask the pros to show off a little for you, too. 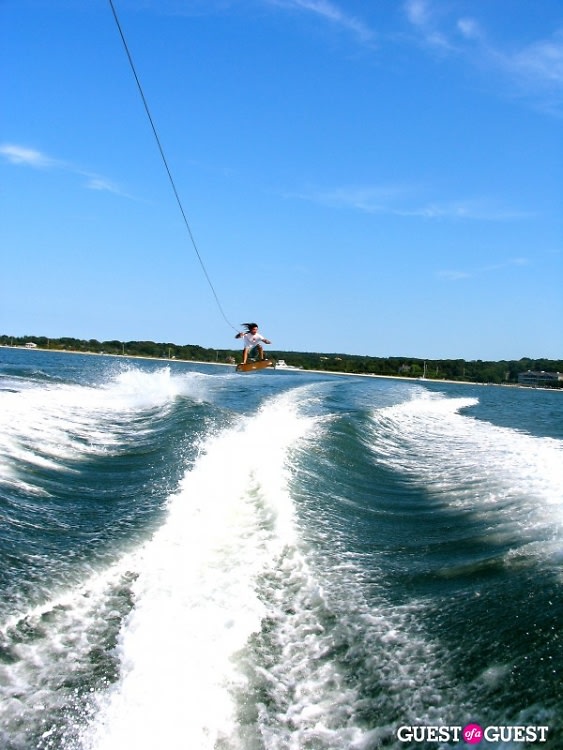 Seeing as there were a few first timers on the boat, we were really excited to have such a helpful and knowledgeable staff to guide us. We had the option of new wave watersports-wake skating and wake surfing-as well as old favorites-wake boarding, water skiing, and tubing. Our crew consisted of some Stadiumred and RdV East industry studs and Team GofG ourselves, and we decided on wake surfing since none of us had ever tried it before. The best way to describe wake surfing is as follows: it looks impossible, but it's totally doable. You're not strapped in, you're literally right behind the boat (don't worry, the propeller is underneath), and you're surfing the curl of the wake.  And you look REALLY BADASS while doing it.  See?! 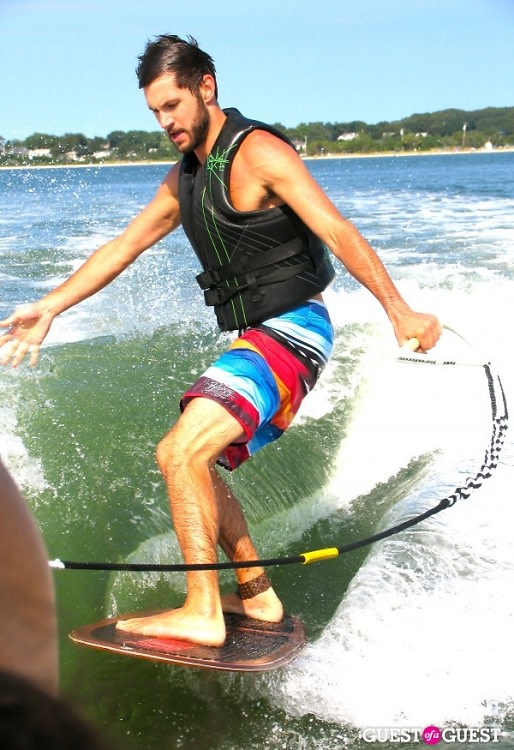 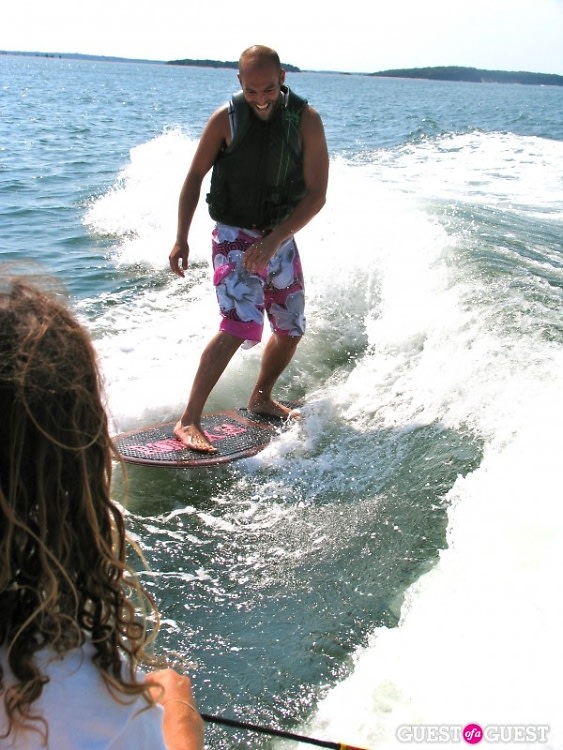 The guys took to it quickly, so, of course, I assume I'm going to fail. Let's face it; I have trouble walking and chewing gum simultaneously. A vision of Hector being dragged behind Achilles' chariot during the Trojan War entered my mind, but Jeff assured me, coordination aside, I would stand up. Sheesh. He's clearly never seen me dance. But lo and behold, with the expert driving of Roger and the encouragement and direction from Jeff, I actually stood up, and was chewing gum to boot (only to fall while trying to pick my bikini wedgie). I was so proud of myself and immediately texted my friends and family, who, knowing me, didn't believe a word. But the pictures are proof: 41 North can make an extreme sports athlete out of even the most lowly, uncoordinated girl in the Hamptons.

Visit the 41 North website and make an extreme athlete out of yourself! 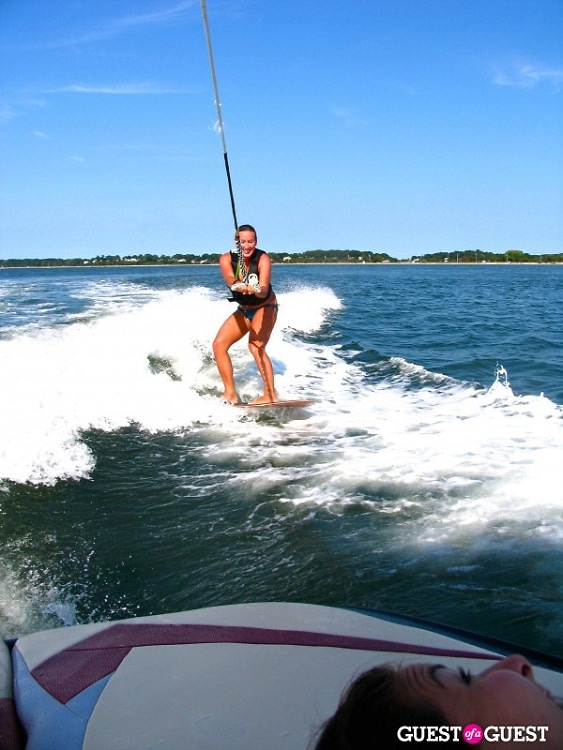 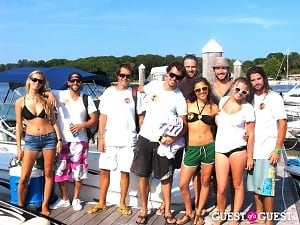 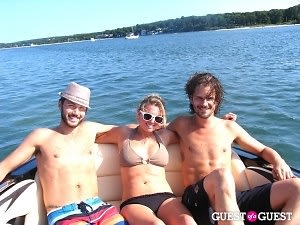 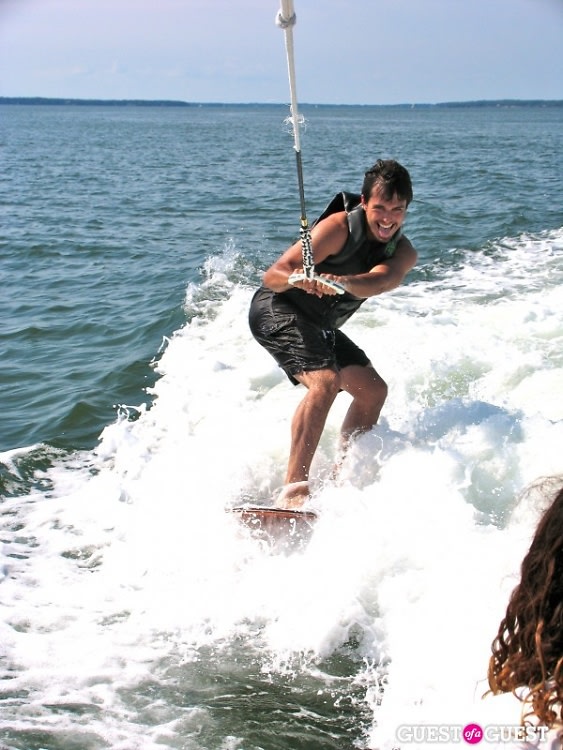