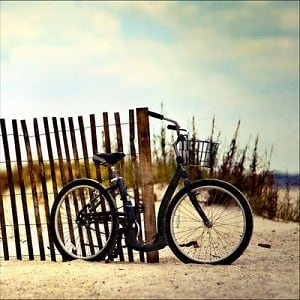 [Picture via Pamela Viola] I've been trying to get on a bike all summer. I swear it hasn't been this hard since before I got my training wheels off. So when we saw this article today on Refinery 29 written by our friend Steven Rojas, we got pretty excited. Summer bicycles! And oh, are some of them pretty! We decided to each select our favorites (which were obviously totally different) in the hopes that the manufacturers would think seeing us riding along Main Street would be the best form of advertising for their play things and send some our way. Or... not.

Kristin decided the Coco Loco Cruiser was her favorite - I think mostly because of the name, but she said it reminded her of Vegas (I'm not really quite sure why?). I think she really just wants to be like Rojas as he said he rode the thing around Montauk. She'd probably buy it and cover it in glitter anyway. Kendra liked the simple and chic white Gary Fisher bike, which is really no shock, because it's got a big basket, it's kind of  throw-back retro type of bicycle, and goes with Kendra's style. My favorite is the Fendi Abici Amante Donna because it's just so ridiculous and no one else would have it and it has fur (fur!) on it, and it's not serious at all. Plus, probably half the people who saw it would ask me if I was joking, and I'd keep really ridiculous stuff in that lockbox. And it's $9,500, so it's more of a dream bike.

Unfortunately, if any of you have seen me walk in a pair of sky-high heels, parallel park a car, or try to carry more than one thing at a time, you know that riding a $9,500 bike might not be the best idea for me. It might not be the most cost efficient idea for me to go gallavanting around on something I am bound to topple over on in a matter of minutes. So while the three of us can sit here and drool over Rojas' list all day long (I think we may have spent a few minutes too long already doing so today - sorry Rachelle!), we need to find some alternatives. So we've come up with three choices:

The three person tandem bicycle. Perfect for all of us, since this way we don't have to be apart. The only thing it's lacking is constant wi-fi, and then we really could stay on the thing all day. The only problem, besides how we would decide who would steer? Three person tandem bicycles apparently will run you about $6,200. Unless we can get GofG to pick up this bill for us, we might have to suggest this be #11 on our Dream Bicycle list.

Here we go - This Schwinn Windwood Cruiser 26" Women's Bicycle is nothing much to look at compared to the beauties on Refinery's list, but for $139.99 it's not breaking the bank, even if we do skin our knees in the process. It might not be as aesthetically pleasing, but either will the twisted handlebar I come out of the bush with, so I won't complain too much.

Ding, ding, ding! We think we found a winner. This Pacific Cycle Dualie Two Person Tandem Bicycle is only $229.99. Split two ways, that's not much more than a hundred a person. So you're wondering what we'd do with the third one of us? Easy. Kristin's going to roller-blade behind us on a rope. Give her a glittery helmet and sequined biker shorts and she's a happy camper.