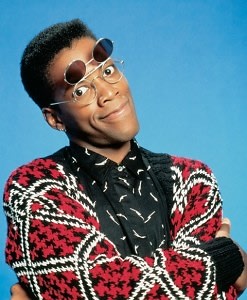 If you haven't found a pair of Persol glasses, or dusted off your Wayfarers, maybe you have a pair of Flip-Up glasses from the 80's you can use this weekend.

Popularized by Dwayne Wayne, the character from the 1980's Cosby Show spin-off sitcom A Different World, flip-up glasses have been puzzling us ever since. Ironically, the fictional character who brought notoriety to this not smart invention (and when I say not smart I mean in both senses of its meaning, stupid and not fashionable), was supposed to be smart (but not fashionable, although he got with Lisa Bonet), starting the series as a math major and progressing into teaching calculus.

The idea behind flip-up glasses or their slightly different sister creation, clip-ons, was that a wearer could flip up the sunglass layer in a nanosecond when going indoors. You heard me, nanoseconds, those snippets of time that give a person "an edge." What about dorkiness, does that give someone "an edge?"

As if it weren't bad enough for you or your bespectacled compatriots, who were already taunted and called "four eyes" back in grade school, this clumsy invention brought schoolyard teasing to a whole new level. Now the door was open for chants of "six eyes," or Gorgon.

Okay, I know what you're saying, maybe they are lame but maybe they have utility that outweighs their lameness. You know what, this was the same argument that was pushed by the creators of fannypacks. Yes fannypacks! Are you now going to walk around the Hamptons with a fannypack?? I hope not. And if you do, it better be Villebrequin or something.

They say necessity is the mother of invention, but they also say everything in moderation. I'm actually not sure why i just brought that up, it seems like necessity has nothing to do with flip-ups, but maybe superfluity does. Anyway, hypothetically, maybe it shouldn't always be entirely about necessity; I guess that's what they call fashion.

So, you might want to ditch the Dwayne Wayne's when cruising around out east this weekend ;)