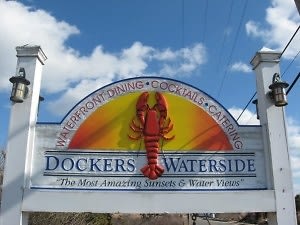 Just this afternoon, The Hamptons Facebook page called out Dockers Waterside restaurant in East Quogue for supposedly violating the privacy of its patrons. The crime? Posting - repeatedly - about celebrities dining at the restaurant, as a means to boost their credibility. Here's the scoop...

Annoying? Yes. Privacy violation? Debatable.  It's doubtful that the celebrity clientele made the establishment agree not to divulge their whereabouts, but, that being said, it's also common decency to respect the privacy of said celebrity clientele when out dining on what they were probably hoping would be a low-key night away from all the bustle of the typical Hamptons scene.  As a usually objective source, The Hamptons said this about their decision to call out Dockers:

"Since its beginning, The Hamptons has made it a point to not state anything negative about business or restaurants on the South Fork. Instead, we would just not say anything about the place at all. We were quite proud of having never had the occasion to break this operating principle. Sadly, today we do and for good reason."

Through "shameless self-promotion," Dockers is losing what once was a good reputation. The food is good, the atmosphere nice, and overall the place has gained a pretty solid fan base over the years.  But fans of "The Hamptons" have already taken sides on the new scandal, most of them agreeing with that the new behavior is uncalled for, one even adding that "they probably hired celebrity look-alikes to dine there LOL." The Hamptons adds:

"By publicly announcing who is currently dining there, they have violated a sacred rule. They seem to want to become an A-List spot in the Hamptons, but do not realize that they never will reach that echelon (they were doing well before these incidents)."

Case in point?  This screen shot taken from their Facebook page, quoting that "Yes we have lots of celebs."

Not only is this violating the unspoken rule of restaurants with celeb visitors, it's also just a little pathetic.  Sorry Dockers, it's time to grow up and let the food do the talking, not your celeb clientele.

[Photos via The Hamptons]