She's been called Joan of Snark, Gawker Editrix, and "the most famous professional blogger." Elizabeth Spiers, blog writer and internet entrepreneur extraordinaire, graciously submitted to our interview questions. We're crossing our fingers that some of her blog savvy rubbed off on us.

The illustrious (extremely illustrious - the woman launches blogs like rabbits birth babies) Madame Spiers was a founding editor of Gawker, is a frequent writer for various websites, and has launched a laundry-list of sites for herself as well as for other companies - Dealbreaker.com, Fashionista.com, Flavorwire.com, and The Gloss.com, to name a few. Via email, she told us about her upcoming novel, Gawker Stalker's metastasis, and what internet domination feels like.

What's it take to get a site up and running, and to make it stick around?

You have to hire the right people, publish at volume, do lots of interesting original content, actively market and make sure your content is memorable and unlike your competitors'. Which is an obvious formula, but not so easy in the execution.

Are there any projects that have a special place in your heart but that you don't think can hack it in the web jungle?

I don't really have any interest in doing web projects that I don't think can succeed on the web. (I did that once to placate someone else, was embarrassed by the result and vowed never to do it again.) I think if I had more time I'd do more projects that don't have commercial potential per se--but I'd probably label those "art projects."

I have three more sites to launch for b5media this year, TBD sites next year, and a few new projects for myself in Q1 or so of '11. I like building new things--for both myself and other people-- and will keep doing it as long as I can.

Don't let the extreme cuteness fool you; Spiers is a blog-publishing dynamo. [Photo courtesy of the New York Observer]

Back in 2006, the New York Times theorized you were gunning for an "online empire." True?

I don't think anyone really "guns for an empire." (Okay, Napoleon did, but look what happened there.) I just want to build new sites/media products that have some serious growth and expansion potential. Ideally, you get some scale and you end up with a bigger better company than you started with--and then a journalist suggests that it's an "empire" because that sounds more sexy and exciting to readers than "high growth scalable medium-sized business." That said, I will totally admit to gunning for a high growth scalable medium-sized business.

What would an entirely Elizabeth Spiers-run internet look like?

An entirely Elizabeth Spiers-run Internet would be horrifying. Part of the glory of the Internet is that it contains multitudes, and not just those of us who are running commercial blog properties and the like. 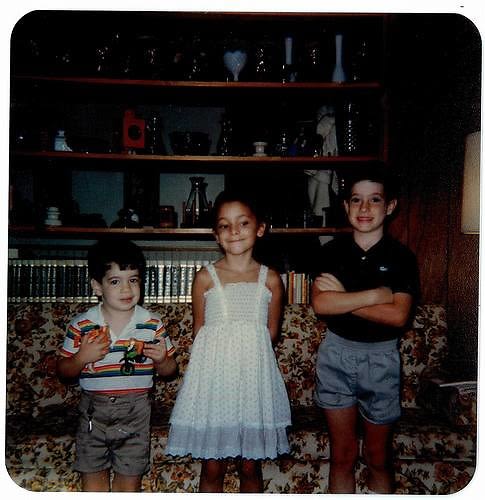 Elizabeth, pre-internet . . . although from the glimmer in her eye, we're pretty sure she knows what's coming. [Photo courtesy of The Gloss]

What have been the biggest changes in Gawker since you were writing for it?

It's much broader in scope and the company is more than one person on a couch with a laptop. I don't think it's better or worse now; it's just different.

You started up the Gawker Stalker feature, right? Has it grown into a Frankenstein's monster, or are you happy with the way it's evolved?

I started Gawker Stalker to just demonstrate to the readership that if they sent us tips, we'd actually use them, but it sort of took on a life of its own. I'm actually surprised that it hasn't evolved more with available technology. I always thought we'd get a huge influx of grainy cell-phone pics of celebrities when everyone got a camera phone but that hasn't really happened. (If you want to see an expanded take on it, Hugh Dornbush's OMGICU.com productizes the whole concept in an interesting way.)

Following Spiers's departure, Gawker Stalker came under increasing fire. Even Jimmy Kimmel got in on the act. Ouch.

Your first novel, And They All Die In The End is coming out soon. What's the book about, and what was the inspiration for writing it? Is your tone similar to the witty, snarky tone of many of your blog posts?

It's a mild satire about a hedge fund guy who gets accused of insider trading. There wasn't any particular inspiration; it just grew out of a short story I wrote a long time ago. The tone is more like my real life tone--analytical with a dry sense of humor.

What was it like to make the transition from the world of the internet to that of the literary novel? Any plans to trash all your computers, move back to Alabama, and continue writing novels?

There wasn't a transition. I've been writing short stories since I was a kid and I've only been on the Internet since '95, so the Internet and fiction writing weren't really an either/or. And the fiction came first, technically. That said, I'm very comfortable with the Internet and novel-writing is much harder for me, in part because I've never done anything book-length before. I can bang out a non-fiction essay pretty quickly, but I'm a very slow fiction writer.

I'll continue writing novels--or trying to, anyway. But most people I know who write books have jobs on top of the book writing and I don't foresee being any different in that respect. I'd move back to Alabama if there were a family emergency, but that's about it. New York feels more like home to me. And I'm never trashing my computers.

We're glad to know the computers are safe. You can find more Spiers-centric news on Elizabeth's website, Twitter, and Tumblr (which, we can report, has both blog news and photos of cute dogs). An editrix, indeed.