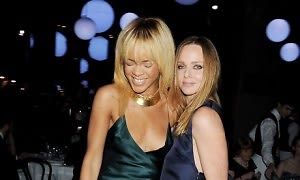 According to the invitations, Stella McCartney's special presentation at London Fashion Weekon Saturday was supposed to be a black-tie sit down dinner and a traditional runway show of her fall 2012 line. The show marked McCartney's first London show in 16 years, and the designer, who will be creating the clothing for Great Britain's Olympic team this summer, proved that she knows how to make a comeback when she surprised guests by turning her dinner party into a flashmob. Models and professional dancers stood up on tables and chairs and performed a number choreographed to a Led Zeppelin soundtrack.  Alexa Chung, Kate Moss, Shalom Harlow, and Rihanna were among guests at what's already been called the event of the fashion season. [Rihanna, Stella McCartney, photo via] Derek Blasberg [@derekblasberg] tweeted:

Watch the dance party below:
1 of 6