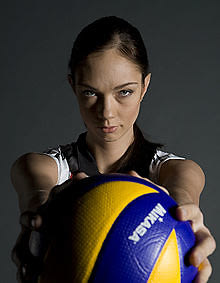 At 6'8, the Russian women's national volleyball team outside hitter and MVP, Yekaterina Gamova is one of the most imposing women to ever play the sport. By leading her team to two world championships, Gamova has earned the title as the best and most well-paid women volleyballer in the world; she's made up to 1.5 million euros in one year. The only thing missing from her impressive resume is an Olympic gold, she already has two silvers. The defending gold medal squad Brazil has to look out for the lengthy striker at the 2012 games though, because normally when Gamova takes the court its Game-Over for the opposing team. [Photo via]
1 of 8