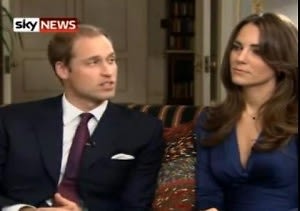 The best thing about the the upcoming wedding of Prince William and Kate Middleton is that they're being forced to do more interviews and press conferences than ever before, which means those of us who had Prince William Tiger Beat posters on our walls finally get a chance to see what he's really like.-

In their first video interview, William seems pretty relaxed and at east in front of the camera, while Kate is visibly more tense (though not cold!), and it's obvious she hasn't had as much experience public speaking as William. But there are other surprises, too. William is pretty funny! Kate has sort of a posh accent, which is surprising given how much the British media talks about her "middle class" upbringing! The two got together when they were roommates (someone start working on that screenplay!)

Here are 20 things we learned from the William and Kate interview. Admittedly, that's probably 19 more things than anyone needed to know. But hey, we've got Royal Wedding fever, and we've got it bad.

1. William proposed on Holiday in Kenya.

3. William says he and Kate are "sort of like ducks, very calm on the outside but with little feet going on under water." Hmm, ok.

4. Kate's mom was "absolutely over the moon" about the engagement. Well, obviously. This was followed by a not-that-funny anecdote by Kate about telling her dad, and then not knowing if her mom knew. Note to the Royal Family Press person: Middleton is not ready for Late Night appearances.

5. Will and Kate met at St.Andrew's University, and were friends for a year before they realized they could "share a giggle" (??) and started dating.

6. William has a very dirty sense of humor.

7. Kate said she was nervous about meeting Prince William for the first time, went bright red, and scuttled away.

8. William is kind of funny! Kind of? Well, more than the other members of the Royal Family. When Kate admits that contrary to popular belief, she had a picture of "the Levi's guy" in her high school locker, and not the Prince, William interjects: "It was me in Levi's, honestly."

9. The couple moved in together with a bunch of other friends, before they were a couple. It was during this time that they got together.

10. William cooks, apparently! He cooked for her at University, and claims his skills are improving.

11. "When I come home from work, the last thing I want to do is start cooking." Officially the most plebeian thing ever uttered by a member of the Royal Family. 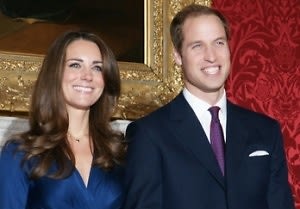 12. "Having a good giggle" is apparently one of William's favorite phrases. Also, officially the most dorky thing ever uttered by a member of the Royal Family.

13. Kate talks about being nervous meeting William's family. "It was fine." She says, about meeting The Queen.

14. "It was very nice of her to come over and say hello", Williams says about The Queen meeting Kate, at a wedding. Can't imagine saying that if my Grandmother wandered over to my table at a wedding.

15. Kate on their infamous breakup: "I at the time wasn't very happy about it...". Proof that William did the dumping.

17. Apparently they've been planning their engagement for a year at least.

19. Kate fell apart a little bit when asked about Princess Diana's legacy, but William picked up the slack. He also patted her on the knee for a brief second. She didn't return the gesture: obviously, they've been instructed to not engage in PDAs.

20. Prince William says that part of the reason he waited this long to propose is that he wanted to make sure Kate had a chance to back out of life in the public eye if she needed to.