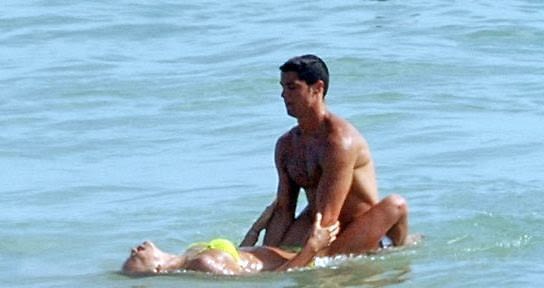 TMZ opened the morning with some saucy pics of Portuguese soccer superstar Cristiano Ronaldo either not knowing or not caring about the watchful eye of the paparazzi as he dryhumps his model girlfriend Irina Shayk on a beach that now may or may not herpes. Though you can't hear it, why do I feel strongly that one of his entourage was standing behind them with a boombox, thumping house music? 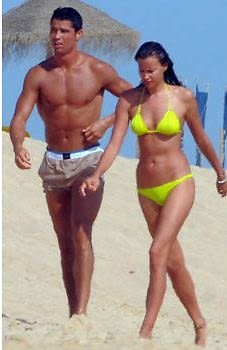 For those not well acquainted with international football, Cristiano is the highest paid player in the world, a remarkably skilled footballer, and someone with the general on-field disposition of a 10-year-old oil heir having a temper tantrum because his limousine driver won't stop for both Wendy's and McDonald's. He's the kind of sneering, too-perfect athlete whose skill, wealth and beauty tend to inspire extreme jealousy and loathing, as opposed to admiration. Sour grapes, to be sure, but at the same time, you just can't look at the guy for more than a minute without wanting to punch a kitten.

In other words, he's Europe's A-Rod. And that means A-Rod, you need to step it up.

Look, A-Rod, I hate you. Openly. You're a whiny, entitled, vain prick who kisses himself in the mirror. You're the worst. But dammit, you're our worst. And I will not have America getting defeated in a pro athlete douche-off.

So A-Rod, the gauntlet is dropped. You need to come up with some awesomely douchey photos, the kind that suggest that you consider yourself the only real human being on the planet and you couldn't care less who else is around. Give an entire airplane $100 each so you and Cameron Diaz can openly join the mile-high club, or buy a Van Gogh and set it on fire, or something. 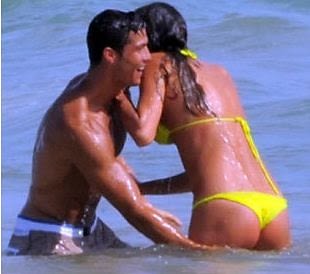 And it's not just Ronaldo, either. Now that Maria Sharapova and Sasha Vujacic are dating, we have douchey celebrity power couples from all over Europe to contend with. We can't put all our hopes on Kris Humphries, he's barely even a celebrity.

America needs you, A-Rod. Please don't let us down.