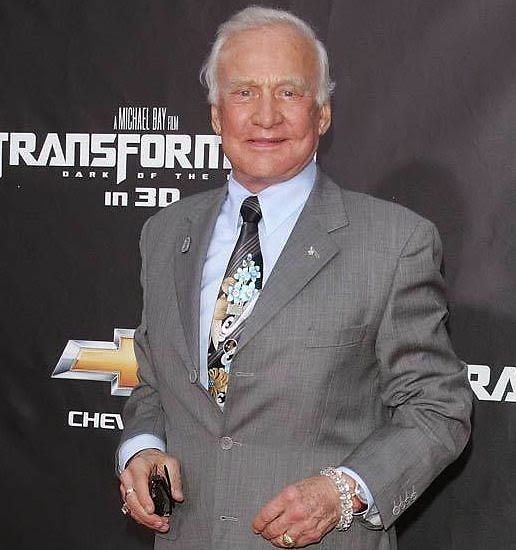 Legendary spaceman Buzz Aldrin was spotted at the Transformers 3 Premiere in NYC last night, sporting some serious moon rocks on his wrist. What he was not sporting was his wife Lois of the last 13 years, third overall, with whom he recently filed for divorce. Now, as that rare breed of celebrity who actually got famous for accomplishing something incredible, like walking on the freaking moon, Buzz was getting a little more leeway from me than, say, Khloe Kardashian. Nevertheless, there comes a time when we have to face hard truths, and there's perhaps nothing more difficult than admitting that Edwin Eugene Aldrin, Jr., USAF Colonel, the second man to walk on the moon, miiiiiiiight be a huge creeper.

Now, this may paint me as old fashioned, but I think the third marriage is something of a cutoff point. Plenty of people get married twice, for a wide variety of valid reasons: your spouse can pass away, your first marriage could have been a youthful mistake, hell, maybe you weren't legally allowed to marry the person you wanted to the first time around. But barring some fairly compelling specifics, once you've been married three times, doesn't it basically show that you're not really taking the whole "sacred bond 'til death" thing all that seriously? 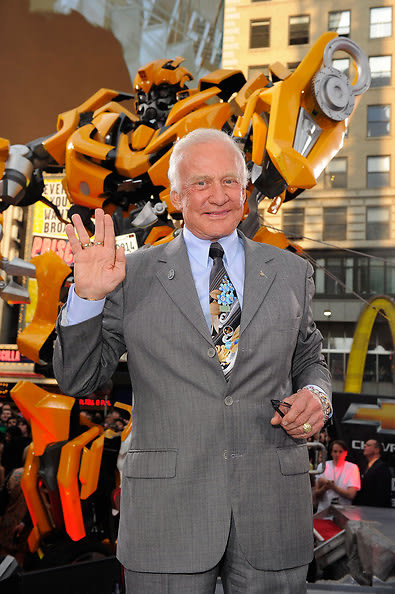 So here we have Buzz, newly separated from wife #3, who up until this point was getting a lot of credit for keeping the famously saucy astronaut from hitting the booze quite as much in recent years. And I'm not saying I have any specific information that Buzz was drinking at this event, though it might be the only way the plot of Transformers 3 could make any sense whatsoever. What I am asking is, what's Buzz's play here? Is he trying to sleep with Rosie Huntington-Whiteley? Advance his rap career? Punch Shia LaBeouf in the face? These are all excellent goals.

But Buzz, buddy, you're 81. You're an honest-to-god American hero, not some bogus phony like Lance Armstrong. We love that you can laugh at yourself, but let's pick our spots for that a little more carefully from now on. Lose the extra jewelery, lose the sunglasses, and please, please let somebody else pick out your ties from now on. And maybe just stay away from Michael Bay in general? He's not exactly famous for lending people more dignity.

And if Hef invites you over for an "old single guys' night," think it over carefully.