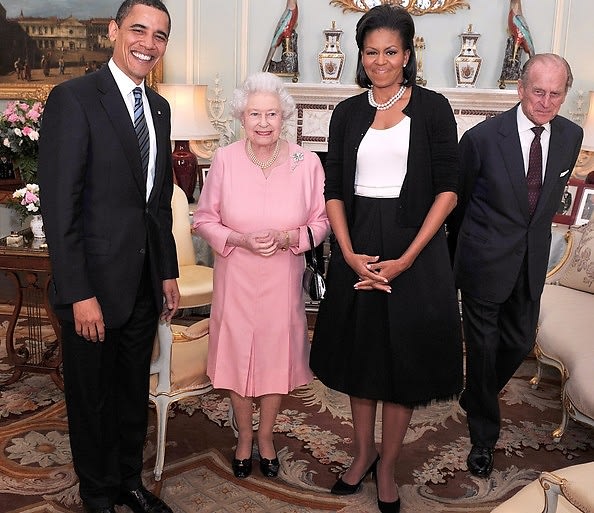 [Barack Obama Queen Elizabeth II, Michelle Obama, Prince Philip, via] The last time I went to London, I stayed in a charming little village by the airport called West Drayton. It had everything you'd expect from a small English hamlet: shirtless Chavs beating their children in public, a main square made exclusively of Indian food and off-track betting, and a giant bar for and by middle-aged lesbians. In fact, I found it to be so traditionally British that I wrote to the President to suggest it as the logical place to stay the next time they went to England. Apparently, they didn't get my letter.

So instead, they've forced their extremely elderly hosts to clear out a spare bedroom in Buckingham Palace that was probably being used to hold giant cases of Costco toilet paper and salad dressing, which is, in my experience, what old people do with spare rooms. 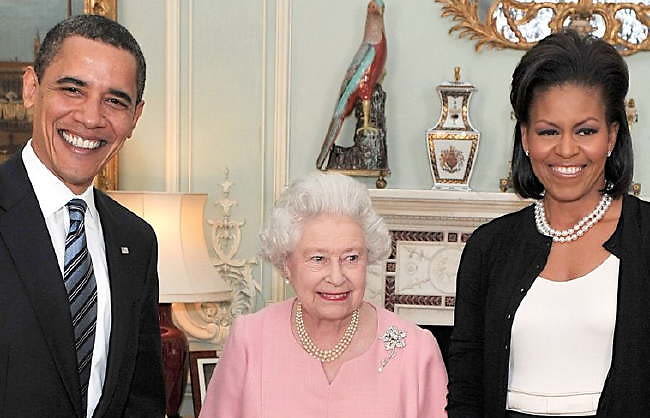 So why, with perfectly acceptable lodging available all over the city, would the Obamas insist on staying in Buckingham Palace, which I'm sure smells like the 10,000 cats that the Queen is rumored to secretly own? Besides, Prince Charles still lives there, with his mom, and he's like 60. Or at least I assume he does, having never bothered to look it up. Doesn't he just seem like one of those guys?

The last time Obama was in town, he gave Her Royal Highness a video iPod, loaded with photos and tunes and specially inscribed to Her. I know what you're thinking: that's a super kickass gift! Unfortunately, the British media did not feel the same way, calling it unacceptably nontraditional and a bunch of other idiotic criticisms that basically boiled down to an iPod being way too new and way too cool for these stuffy, polo-playing whiteys. So this time around, who could blame Obama for wanting to tweak them a little bit? I notice the present was far more traditional: a leather-bound photo album, some horse-riding crap for Prince Phillip. You know he was secretly expecting an iPad2 and getting really excited. After all, what do you figure Prince Phillip does during Visits of State? 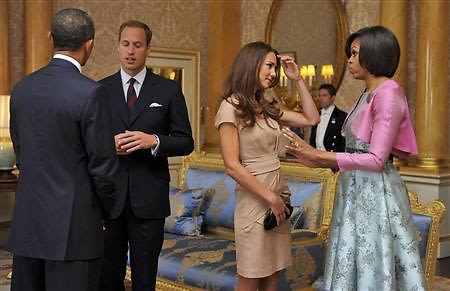 Michelle's Laying Down The Law on Kate And William

The above photo may look like a full conversation between the Obamas and the newlywed Royal couple, but appearances can be deceiving. Only Michelle is talking in this picture, and here's what she's saying:

"Look, bitch. I suppose you're cute in that completely forgettable way, and at least your husband has the good grace to start losing his hair at 30 like every other male member of his family. But there's only room in the English-speaking world for one dynamic, attractive power couple with actual political power. Two, if you count Brad and Angie. So what I'm saying is, watch your back, or I will personally pick out the dress they bury you in, and it will be way, WAY nicer than what you would have picked out. Got it?"

They're After The Hat 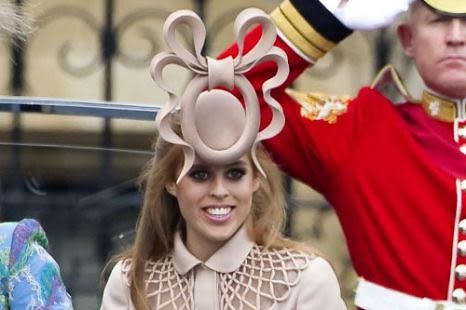 Bidding closed on Sunday for Princess Beatrice's Royal Wedding Hat, and the final price was well over $100k. That means that this so-called "Buckingham Palace Visit" could really be no more than a well-timed mission to get that hat before it gets shipped off to Elton John's house or wherever. While the Queen sleeps, Michelle is going to slip into a bodysuit, Catherine Zeta-Jones style, and steal the hat from it's laser-protected security chamber. Then, they'll bury it at sea on the way back, like bin Laden. It's all about the thrill of it for those Obamas, you know?