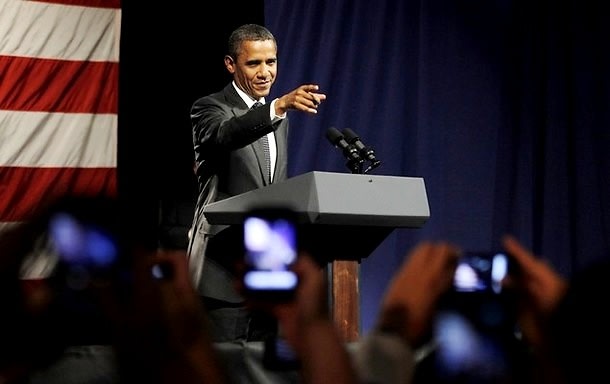 [President Obama at House of Blues fundraiser via] It ain't easy being Barack Obama. Hip, modern Presidencies have hip, modern problems, so while the FDRs and LBJs of the world also had to grapple with recession, war, and divided Congress, they were spared the additional agonies of the 24-hour news cycle, the Tea Party, and having to worry about whether or not B.o.B. would show up to your fundraiser. Luckily for President O, he's a big picture kind of guy, so when his intricately planned fundraiser event at the House Of Blues on Sunset Strip yesterday was interrupted by a religious heckler, the President kept his cool.

[If the above embedded video of the heckling incident isn't playing for you, it can be watched HERE]

Maybe the big O has wised up to the secret that's been keeping conservative shock jocks on the air all these years: it's actually better, ratings-wise, to be hated than loved. Who watches the most Bill O'Reilly of anyone I know? My very liberal Uncle Jerry, who I guess loves the feeling of having his blood pressure spike. When last night's wingnut heckler started screaming about Jesus, maybe Obama just reached into his pocket, felt a giant roll of $100 bills (as we reported yesterday, tickets for this fundraiser started at $250 and went up to $10k), and felt the stress ease away. And it even looks like someone got a free jacket! 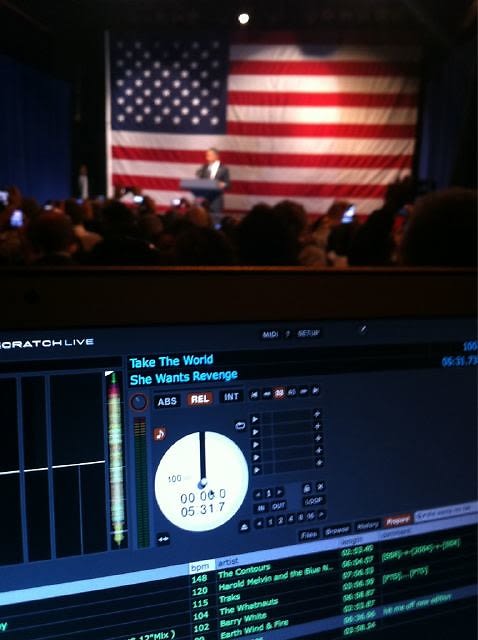 Besides, it was all smooth sailing after that. L.A.'s own Adam 12, the event's DJ, tweeted this pic of queuing up his own band's (She Wants Revenge) song with the President on stage, which is a thrill I'm sure very few DJs ever get to realize, although I hear Hootie And The Blowfish was commissioned to rewrite the national anthem of North Korea. And while there was indeed one other heckling incident, it was so Southern California that I'm pretty sure it made Obama happy. According to the HuffPo piece:

"Later, another, more-friendly heckler shouted out, 'Don't forget medical marijuana!' Obama responded: 'Thank you for that.'"

There are no reports on whether or not, after his second fundraiser, he filled his pockets with plentiful, quasi-legal Blackberry Kush before getting back on board Air Force One. Although, I guess he'd have to be careful. These uptight morality nuts are apparently everywhere.