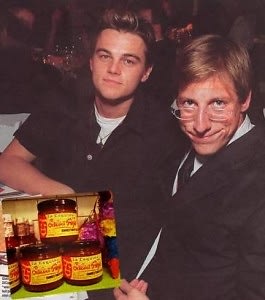 [Dana G, left, has traded dinners with Leonardo for salsa themed snacking]. Dana Giacchetto was a smooth talking character of the 90's who schmoozed his way around, somehow convincing everyone from Leonardo diCaprio to Ben Affleck to give him their money to manage at his fund, the Cassandra Group. He  used said money to pay for a lavish lifestyle of dinners at Balthazar and a lot of really happening parties in his ginormous loft in Soho filled with expensive art and over priced champagne. It was the "best $2k he ever spent" (and then some) every night of the week. Well, the gig ran it's course, he lost his investors millions of dollars, and he went to prison for fraud for almost 5 years. He is now apparently selling salsa at the Met foods on Mulberry street.  Yes. Salsa. More below:

At one point, Dana was so hot that Leonardo was living in his Soho apartment

No one really knows where Dana came from but one things for certain, he likes to embellish stories. [NYO]

There has been a book "You Will Make Money In Your Sleep" published on the story of Dana. [Amazon]

He had a penchant for Prada suits, pet cockatoos and generally lavish living. "He was definitely the man," says Noel Ashman, owner of the Manhattan club Veruka. "Every party he had was better than the last." [People Mag]

After he was released from Jail in 2003, he was involved in another scam. [Fortune]

While he misses working with money, Giacchetto isn't one to throw away the towel so soon. Recently he started a food company with his wife, Allegra Brosco, called "Taste." [NYT] [TMag]

According to several sources, you can catch Dana promoting Taste's new line of salsa for La Esquina at the Met foods store on Mulberry and Prince. If you're in the neighborhood and bored, check him out. The guy has got to be good for more than a couple of stories....