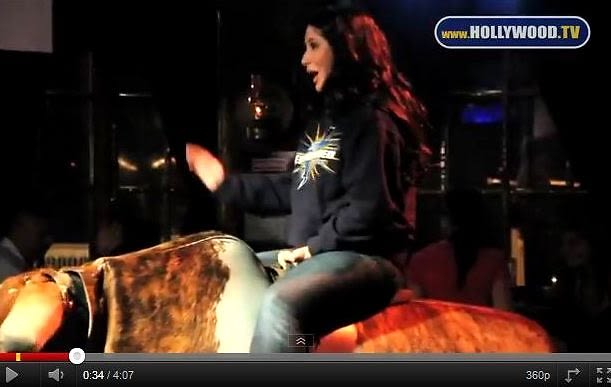 A night out on the Sunset Strip invariably contains a few things: falling on the ground, a D-list celebrity encounter and a heated drunken argument with a complete stranger. Since Bristol Palin's whole life is a D-list celebrity encounter, we know she was able to knock off that whole checklist in about 4 minutes of riding the bull as a heckler screams "your mother's a whore!" at Saddle Ranch last night thanks to the video below.

Dressed like it was laundry day at Bible Camp, Bristol was for some reason hanging with the crew of her reality show at the tragic tourist trap and "Bad Girls Club" favorite, Saddle Ranch, when she was struck by the urge to ride that big, strong bull. Now, given that this exact urge has already given Bristol a 3-year-old son, you'd think she would have learned to control it by now, but nope, she hopped right on. And then this happened:

Now. It's rare that I find myself on the same side as anything named "Palin," but this heckler has to be chastised for his remarkably poor heckling. We'll give him the benefit of the doubt and assume that he was so full of righteous rage and hatred for professional news clown Sarah Palin that he just couldn't think straight, but even still. "Your mother's a whore"? "Your mother is a fucking devil"? "Your mother ran Wasilla into the ground," seriously? Surely he could do better. At least he got a Glen Rice line in there.

And for Bristol's part, she did the classic, "trying to stay above it" ploy, where you calmly ask for examples over and over again in order to make the angry person more angry. Bristol, I don't know how to tell you this, but this is called Gotcha Journalism, and it was invented to make your mother look stupid.

So, like any normal night on the Sunset Strip, there are no winners. Welcome to Hollywood, Bristol. Where's your kid, by the way?