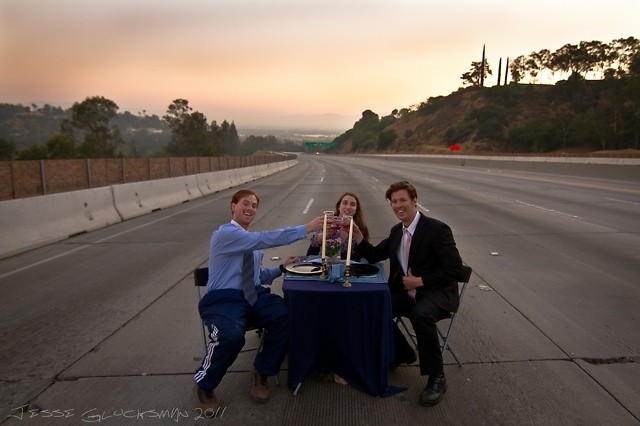 Carmageddon: so anticlimactic! After all the prognostications of doom, what did you really get out of it? Half a demolished bridge? A whole bunch of hot air from city officials? A few discounted domestic beers? If you're Jesse Glucksman, Matt & Amanda Corrigan, or Barry Neely, at least you got a pretty bitchin' Christmas card photo out of it.

That's the group of friends, pictured above (Jesse was the one who planned the stunt and took the photo), who had an impromptu dinner party on the 405 in Sherman Oaks early Sunday morning. According to an interview he gave Jalopnik, Glucksman, an online color editor, says that the idea arose when his friends found what they figured to be the least guarded stretch of the Freeway and came up with a plan. If that doesn't entirely explain the "why," this quote should:

"How often do college educated professionals in their late 20s/early 30s get to do something so ridiculous? I've got kids, man. I never have time to really have fun."

Jesse Gluckman and friends, we salute you. You've produced the Best Photo of Carmageddon.

Just a lonesome man from Silverlake, a long way from home, playing his guitar on the onramp.  [photo via] 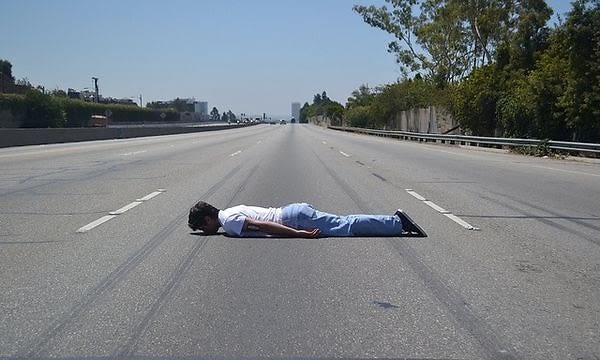 I know, I know, we all agreed that planking isn't cool anymore, and most likely never was to begin with, but the fact that he's facedown on the 405 has got to count for something, right? [photo via]

SIGALERT is best known for dispassionately telling you that the reason you sat in traffic for four hours was because of a horrible school bus accident, but even their famously dry incident descriptions got a little punch-up for 405 weekend. [photo via]