It's here, it's finally here! Today at 7pm, 405 ramps will close, marking the beginning of Carmageddon, the horrifying Hell on Earth first mentioned in an apocryphal chapter of the Old Testament found in a cave in Galilee, last predicted by Charlton Heston on his deathbed.

Yes, as Stephen Colbert points out in the amazing video above (in case unlike me, you weren't drinking bourbon and watching Colbert with your parents last night), the horrifying spectre of "increased traffic on two off-peak days" carries with it the most terrifying concept possible here in L.A.: "someone might actually have to walk somewhere." 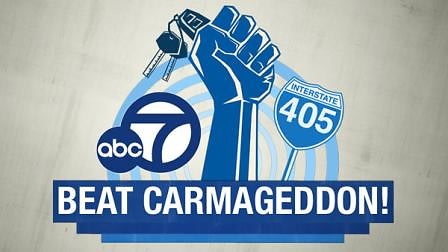 I'm not going to lie, though, this kind of feels like Christmas morning for me. In much the same way that a bored firefighter on a 48-hour shift longs to run into a burning building, I've been writing and thinking about the Car-tastrophe for so long that, if it were to get canceled or something, my already flimsy sense of purpose in life might be completely shattered. In fact, part of me is rooting for it to be as crazy as possible, to be such a gigantic nightmare that it retroactively justifies the insanely hyperbolic coverage we've given the whole thing. We'll see how that goes down, but in the meantime, here's a handy recap of our coverage:

First, Emily got the ball rolling by reporting on the "nightmarish" warnings of our far-from-levelheaded city and county officials.

Then, we told you about the Unluckiest Couple In The World, who are hopefully still getting married in Beverly Hills tomorrow.

We told you about websites where affected Angelenos can bond, share discounts and travel tips, and if all else fails, coordinate their group suicides.

JetBlue will fly you across the freeway (and not much else, distance-wise), Burbank to Long Beach, for $4 one-way.

Finally, we broke you off with a master survival guide to discounts, drink specials, tips and general info about this historic weekend.