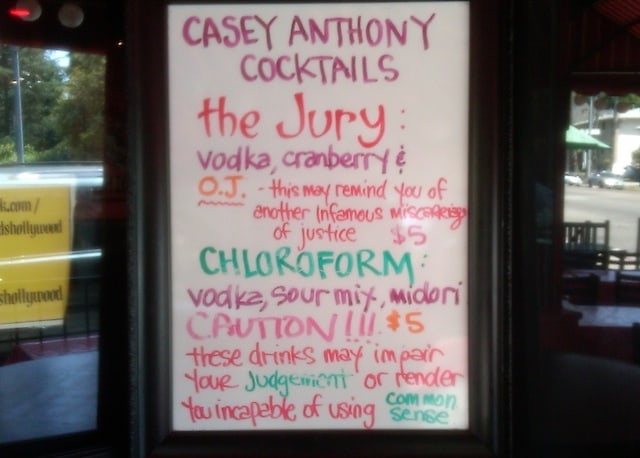 As regular readers of this site may already know, we, like many media outlets, were following the Casey Anthony trial. On a largely unrelated note, we've also had a thing for cocktails lately. It's safe to say that we did not expect these two interests to come together in quite this way. But then again, when you're Franklin Village institution Birds, known primarily for keeping up the BAC of the outrageous comedians of the next-door Upright Citizen's Brigade Theatre, I guess you have to try a little harder.

Yes, you read the sign correctly: specially priced, unique cocktails based on Florida's most infamous toddler murder trial (this year, at least?), served with a smile at a comedians' bar. Poor taste? Sure, absolutely, but then again, there's bound to be at least three jokes just as cringe-worthy at any given UCB show. After all, UCB is the group that wanted to have a baby Juggalo funeral, so I'm fairly positive that they don't really draw the line at dead baby jokes. Then again, they're also the group that gave us Amy Poehler, Rob Corddry and Nick Kroll, among many, many others, so they may just know what they're doing.

But would the murderous cocktails be any good? I guess vodka, cran and OJ isn't really rocking the boat (I think it's normally called a Madras), but the Chloroform is getting a little more interesting. Yeah, for $5, I'd give it a shot.

So I'm not going to condemn Birds, which is only doing what it ought to by appealing to its target market: young comedians and comedy fans with sick senses of humor. Nothing wrong with that. Just, if you read this post and it inspires you to go put down eight or nine of these things and then commit a horrible crime of some sort, learn from Casey's mistakes and clear your search history first? Thanks.

[top photo via, UCB Theatre via]