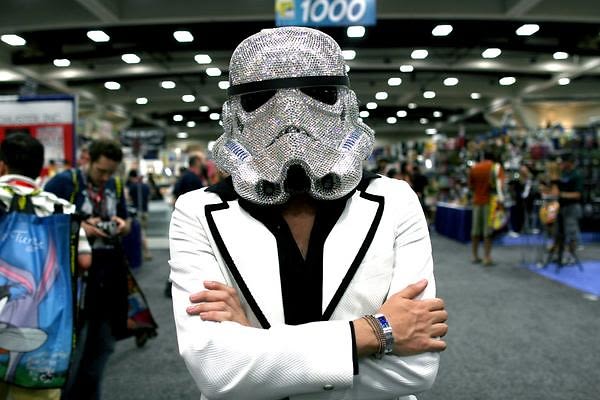 Other than the "Glee" panel, there was really no wrong reason to go to Comic-Con 2011. After all, if you can't feel free to openly and truthfully proclaim your love for all sorts of crazy, nerdy things at a comic book convention, where else in the world could you possibly do so? That's why it's not surprising that Comic-Con was bigger than ever this year, with special appearances from the creators and stars of all sorts of mainstream entertainment that went far beyond the comic book and sci-fi realms. Let's take a "Glee"-free look!

The "It's Always Sunny In Philadelphia" cast gave the audience an advanced screening of the season 7 premiere, led a sing-along, and generally just basked in the dirty-old-troll-man glory of Danny DeVito. 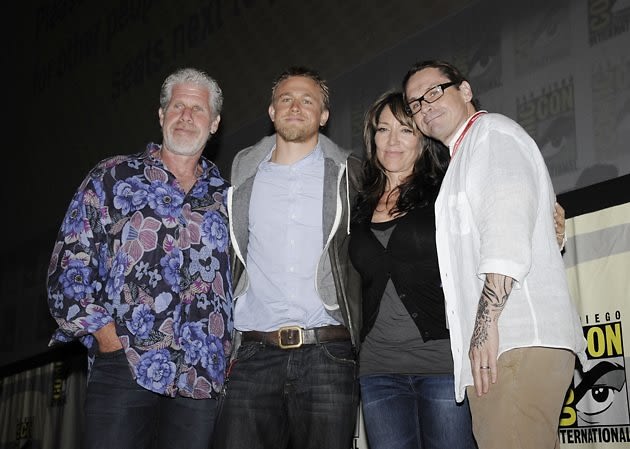 The stars of "Sons of Anarchy" also held a panel, where the topic of conversation may or may not have been showrunner Kurt Sutter's hatred "of Glee". I know, I said I wasn't going to talk about it. Let's talk instead about Ron Perlman's shirt in this photo. Normally I'd say it looks like the Easter Bunny threw up all over him, but for Ron Perlman, the Most Handsome Man in Hollywood? I might just sign off on it.

Joan and Melissa Rivers were on hand to provide their classic red carpet snark. 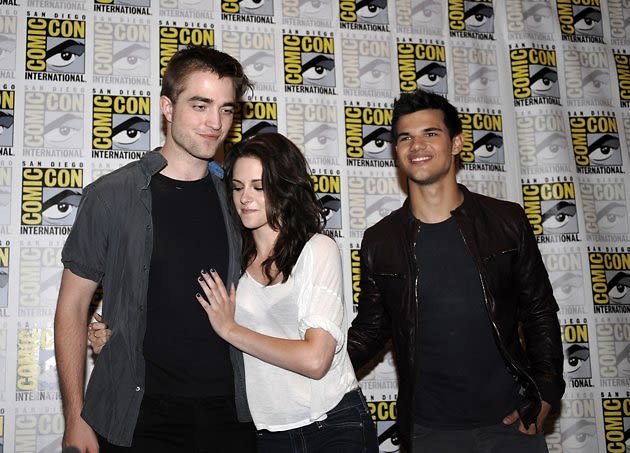 Speaking of inexplicable cultural phenomena, here's the gay vampires from Twilight, yukking it up to promote their new comedy film Twilight: The One Where They Finally Have Sex, I Think. Has anyone else noticed that the one thing these three really have in common is their massively disproportionate foreheads? Seriously, there is a TON of above-brow real estate on all three of these faces. Who knew the key to being a vampire was an extra chromosome?

Don't get me wrong, I love the fan costumes. I just wonder if, at some point in the middle of painting yourself completely green, you have to stop for a moment and take a deep breath.   [photo via] 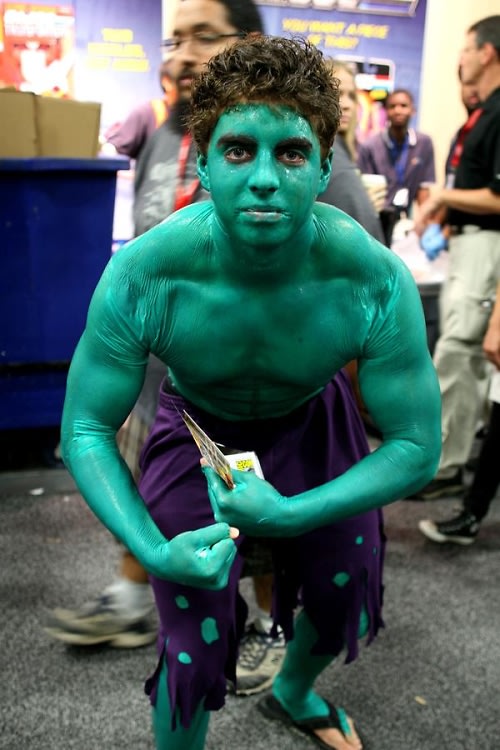 Actually, based on the number of people painted green, I'm guessing that's a "no." Maybe they all get together at like 3 a.m. and work on each other? If anyone can find the "Searching For Group Bodypainting" thread on San Diego Craigslist for me, I'd be delighted. [photo via]

Let me be clear: I'm not including this photo because I think LL Cool J is still a celebrity. I'm merely including it because I think it's absolutely hilarious that there was an "NCIS: LA" panel at Comic-Con. Did a single human being show up? And if so, what questions could they possibly have asked? "L, does CBS pay your gym membership?" I swear to God, more people watch real NCIS investigators do their jobs than watch NCIS: LA.

Marvel's been tight-lipped, but it turns out that Captain America gets hit with a de-aging ray 10 minutes into The First Avenger. Don't worry, though, this kid kicks some serious ass.  [photo via]

Don't ever let your parents tell you there's not money and prestige in being a nerd, if you do it right. Plus, Spielberg announced Jurassic Park 4, which is really, really exciting news if you don't think too hard about the fact that the second and third Jurassic Park movies were completely awful. Well, as long as sexy Jeff Goldblum is stammering away in it, it'll draw the ladies.

A good laugh was had by all when a super-nerdy, costumed fan at the Spider Man panel took of his mask to reveal that he was super-nerdy, costumed actor Andrew Garfield, who will be playing Spider Man now that Tobey Maguire is going to jail for his dog fighting ring or whatever that was. At the rate that we're "rebooting" properties now, it's only a matter of time before two, even three competing Spider Man films with different lead actors and different stories are all in the theaters at the same time. That's entertainment, folks!

[all other photos via]