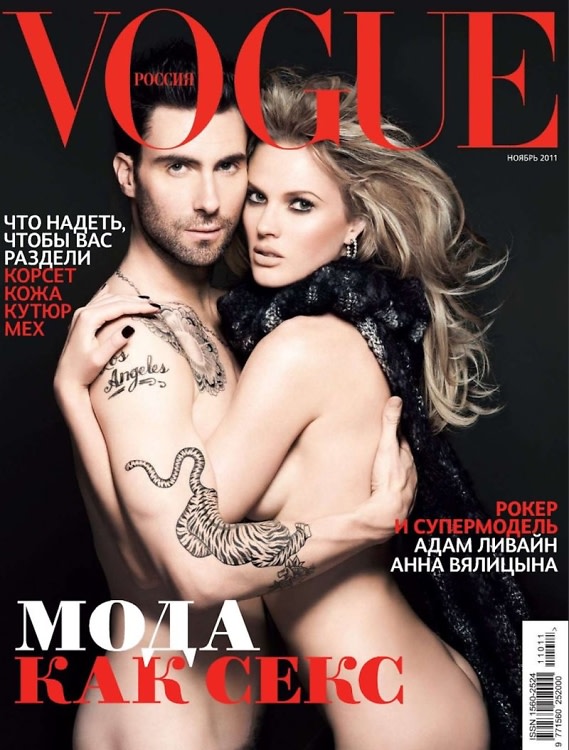 How much did we all enjoy those borderline-NSFW ads featuring a fully naked Adam Levine whose nether regions were barely concealed by the strategically placed palm of model girlfriend Anne V.'s hand? Sure, they were ads to promote prostate and testicular cancer awareness placed exclusively in Cosmo which makes almost no sense, but whatevs. I think I speak for females, the city of West Hollywood, and probably a hetero male quotient with secret man crushes when I say I'll take any excuse for Adam Levine to take his clothes off. Which is why it brings me great pleasure to share that the rocker-model couple are at it again, this time for Vogue Russia and there's some Balmain and YSL involved so you might need to take moment before we get into all the photos.

The two are featured on the cover of the November issue and have a pretty spectacular black and white spread inside with some steamy shots of them in various states of undress. And of course any clothing that does make a cameo in the shoot is all Tom Ford, Yves Saint Laurent, Alexander McQueen, Chanel, Prada, Balmain, Alexander Wang, Louis Vuitton and I'll stop myself there. I think you get it, so let's move on to those shots and if nothing else goes right today, at least you have this.  [Adam Levine, Anne V Vogue Russia cover]

[All photos by Alix Malka for Vogue Russia via]