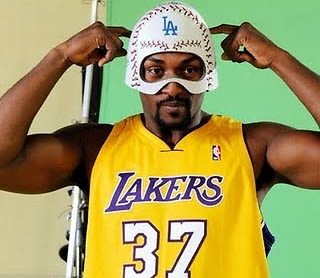 It's not a well-kept secret that we here at GofG love Ron Artest. The man is both instigator and peacemaker, ballplayer and rapper, outspoken mental health activist and complete lunatic. As Walt Whitman would say, "I am large, I contain multitudes." So let us be the first to jump on the story of a brand new venture from Team Ron-Ron, if his Twitter feed is to be believed: a funny-costume based comedy tour to kick-off at the Improv on Melrose July 8. Will we be there? You bet your ass we will.

Honestly, we'd support Ron in any new endeavor he was undertaking; he's earned our trust like that. But comedy seems like a particularly natural fit for a guy that's never had trouble making us smile. According to his recent tweets:

@ronartest:Yes I will be having a variety of outfits Crazy outfits Super funny

@ronartest: I need some funny ideas for outfits 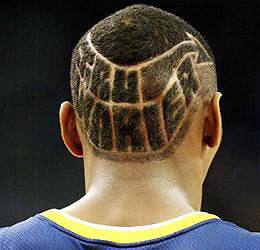 So, to recap: Ron Artest will be bringing a costume-based comedy show to Hollywood in one month, and we expect to see all of you there. And we expect you to Tweet @ Ron immediately with ideas of who, or what, he should be dressing up as.

Some suggestions could include former teammate Yao Ming, his hero Michael Jackson, or as we suggested, Kid from Kid N'Play (with Lamar Odom as Play). But hey, be creative. Just be respectful too. This is Ron Artest you're talking to, and while I shouldn't have to say this out loud, he's a way better guy to have as a friend than as an enemy.