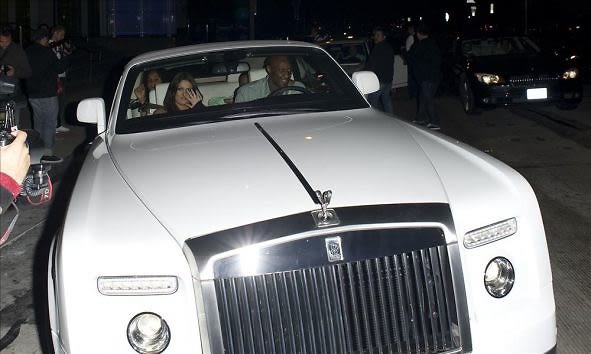 Is Khloe Kardashian rolling in it? Not really, but she certainly makes it seem that way when she gifted her husband with a Rolls Royce as a Lakers victory prize. Critics have been coming out of the woodwork on this ever pressing issue, claiming she bought her husband's present with his money because between Quick Trim, hosting parties, and not one but two reality shows I guess people think she's poor.

@NotJayCutler I can't believe @KhloeKardashian had enough Cookie Crisp box tops to buy Lamar Odom a Rolls Royce. about 23 hours ago via web

@spencerpratt "People r so pathetic," Kardashian, 25, Tweeted. "Y would I give some1 a gift w/ their money?" haha I bought all Heidi gifts with her money! about 1 hour ago via web

However, if you really sit and think about the present in conjunction with Khloe's recent fun times for all of America to see, the worth of this car may make more sense.

If you've seen the recent episodes of "Kourtney and Khloe Take Miami" show, you may recall that before Lamar came to visit her for a brief stint in Miami, Khloe let sister Kourtney try to remove her hair...down there.  As Khloe put it best, her hoohah suffered from third degree burns.  Ew. Privately Khloe breaks the news to Lamar, but it felt llike a bad episode of candid camera because...hello! everyone could see his reaction, so he had to make it good. After this literal hot mess, I think Lamar deserves a Rolls Royce, even if it is on his own credit card. Give this couple a break, Khloe does enough harm to the two of them on her own.

[Photo by SplashNews via]