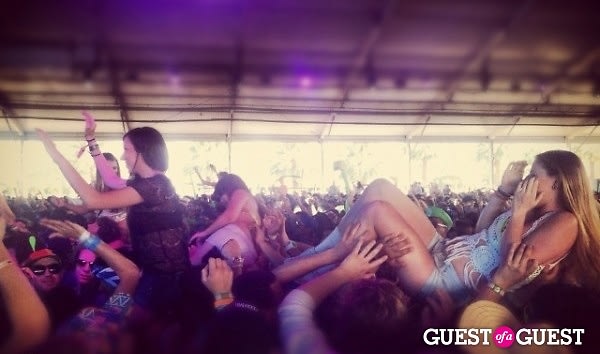 Despite the fact that a good many out there are still paying off the costs to both their bank account and brain cell count of attending Coachella this year, we learned Monday that Goldenvoice very simply does not care. It hasn't even been a full month since this year's two-week desert music fest, but the unbelievably premature presale for Coachella 2013 tickets begins this morning. And as your faithful source for all things Coachella, we have the details on what you need to know about purchasing Advance Sale tickets to the festival that doesn't even have a lineup when they go on sale in about 30 minutes.

Once again, Coachella 2013 will be held over two weekends: April 12-14 for Weekend 1, April 19-21 for Weekend 2. Advance sale for both weekends begins at exactly 10am PST from the official Coachella website. Brace yourselves because ticket damage has been jacked up from last year's. Advance Sale, which lasts through next Thursday, May 24, 2012 at 10pm PST, is your one chance to take advantage of the Coachella Purchase Plan, a new feature that means the price you see is what you'll pay (no additional shipping fees, etc.). Here's a breakdown of the pricing:

Here's a rundown what will happen when at 10am PST when Coachella 2013 Advance Sale begins on the Coachella website:

First, you'll have to select for which of the two weekends you want to purchase tickets.

Make sure to refresh your browser page at or after 10am PST (you can't access the presale before then).

Once you do this, you'll be given a code to enter to access the Standby Page where you'll basically have to wait for some indefinite period until space becomes available for you to access the purchase page.

The general sale of Coachella 2013 tickets will likely happen when the lineup is released (probably January 2013). Please note that we think this is all completely insane. Just downright batshit.