Persepolis. The Pyramids of Giza. The Statue Of Liberty. Mount Kenya National Park. And East Hollywood? If US Interior Secretary Ken Salazar has his way, Barnsdall Art Park's Frank Lloyd Wright designed Hollyhock House will soon be on the United Nations' list of the world's most significant natural and cultural sites, known as UNESCO World Heritage Sites.

Salazar nominated Hollyhock, along with 10 other FLW buildings, asserting that they meet the criteria of being not only an "outstanding" example of architecture but also a "masterpiece of creative human genius." So, y'know, no big deal. 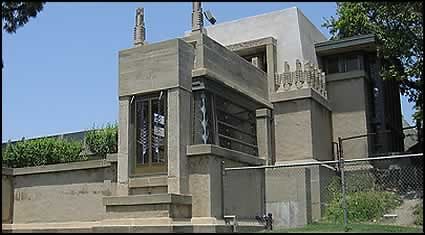 The centerpiece of Olive Hill's Barnsdall Art Park, Hollyhock was originally designed by Wright for Aline Barnsdall in 1921. UNESCO describes it as "a dramatic expression of Wright's approach to creating an architecture for a southern California setting," noting that "the design seamlessly melds exterior and interior living space via terraces for each room and an intricate circulation pattern." In the late 20's, Barnsdall donated the house and the surrounding area to the city in honor of her father, which is how the Art Park (the grounds also hold the Los Angeles Municipal Art Gallery) came into existence.

If Salazar's nomination is approved (the 11 buildings now go up for review by an international committee), Hollyhock and these 10 other buildings could be UNESCO World Heritage Sites by 2014, which KPCC notes "would also [aside from prestige] make it easier to attract funds for conservation."  [photo via]

Let's look at the other 10 FLW nominations:

Designed for businessman Frederick C. Robie, the house "is both a masterpiece of the Prairie style and renowned as a forerunner of modernism in architecture." [via] 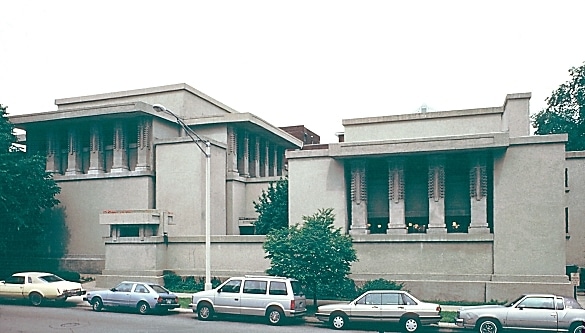 Designed "not merely [to] create a religious structure, but one that fitly embodies the principles of liberal religion for which this church stands... unity, truth, beauty, simplicity, freedom and reason." [via] 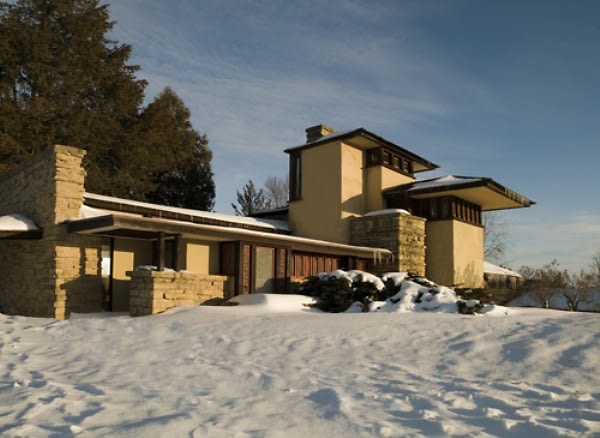 "Taliesin, the most personal of Wright’s masterpieces, was constructed of simple, inexpensive materials... Wright built the house over 48 years, and never stopped adding to it or changing it until he died. Often described as more of a village on a hill than a home, the house seems to grow from the site, with vistas of the surrounding countryside to the east and an intimate hill garden to the west." [via]

"Fallingwater is a happy flowering of Frank Lloyd Wright's genius, a great work of art. Yet underneath the effects of great art - however masterly and ingenious - there lies a consistency of the whole."

"Both the Administration Building (also called the Johnson Wax Building) and the later Research Tower...are of brick and glass. The main office work space is articulated by dendriform columns capable of supporting six times the weight imposed upon them, a fact Wright had to demonstrate in order to obtain a building permit."

"A great and poetic building designed in subtle harmony with its magnificent setting of desert and mountains, and with deep intuitive feeling for the nature of the chosen materials and for the way man might best live under the hard, bright Arizona sun." [via]

"Wright had two major difficulties of a philosophical sort in designing a skyscraper: first, as a believer in an architecture close to nature, he had a hard time justifying a tal, upright, seemingly anti-nature building; and, second, his obsession with the twin concepts of continuity and plasticity—a preoccupation that had led him to the sea-shell and the cocoon as ideal structural prototypes—made it difficult to approach the design of a tall, multicellular building...He solved this dilemma in a characteristic fashion, by going to the one source in nature which did suggest a way of building a tall structure: the form of a tree." [via]

"...[Wright's] great swansong, the Solomon R. Guggenheim Museum of New York, is a gift of pure architecture—or rather of sculpture. It is a continuous spatial helix, a circular ramp that expands as it coils vertiginously around an unobstructed well of space capped by a flat-ribbed glass dome. A seamless construct, the building evoked for Wright 'the quiet unbroken wave.'..."

"The inspiration that one receives from living in a beautifully designed home here takes place in the realm of the building in which one works. The design of the Center not only considers the fundamental practical aspects, nor simply the necessities and conveniences of those working in it, but makes their conditions at all times harmonious, beautiful, and inspiring." [via] 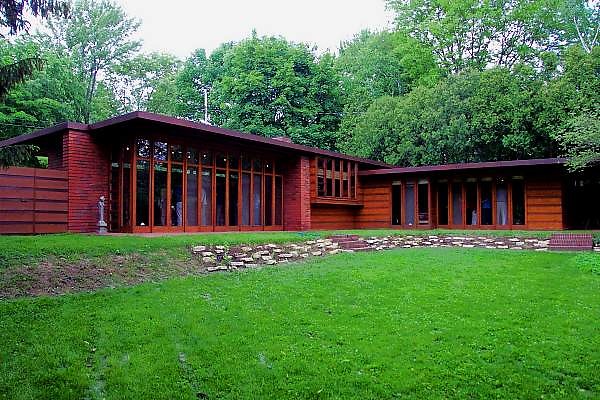 "We can never make the living room big enough, the fireplace important enough, or the sense of relationship between exterior, interior and environment close enough, or get enough of these good things I've just mentioned. A Usonian house is always hungry for the ground, lives by it, becoming an integral feature of it." -Frank Lloyd Wright