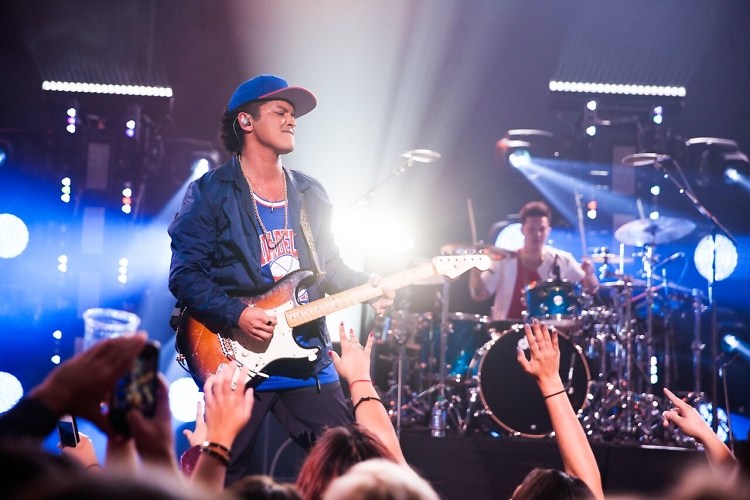 Last night, T-Mobile celebrated the announcement of their Un-carrier X live streaming feature by hosting a Bruno Mars Concert. Over 6,000 T-mobile customers and fans were wrapped around the block at the Shrine Auditorium and Expo Hall. Among the audience were a few of our favorite celebrities. Jaime King decided to look over the cold weather and wore a sheer ensemble that showed off her long legs. The temperature definitely did not prevent her from having fun, as she ran up to model friend Keleigh Sperry, to give her a huge hug as she was going through the red carpet. Jaime wasn't the only one whose leg-revealing outfit created a buzz. Olivia Munn wore an ivory outfit consisting of a mini skirt, a blouse and a matching coat.

The crowd was excited about Bruno Mars but the secret extra performance kept everyone guessing. We were pleasantly surprised to see Zedd open. He had the entire Shrine Auditorium on their feet as he played his track. Following him, Lil Jon and DJ Vice took the DJ booth. Although, Lil Jon did not perform, he kept everyone entertained by playing old time hits. The energy instantly rose when Bruno Mars and his enthusiastic band and back up singers came on stage. Bruno performed some of his most well-known songs, from "Just The Way You Are" to "Billionaire." He managed to find the perfect balance between his slow and impressive vocal performances and keeping the crowd on their feet with his upbeat songs. He closed out his encore with one of his latest hits, "Uptown Funk," which was a great way to end this eventful night with a bang.