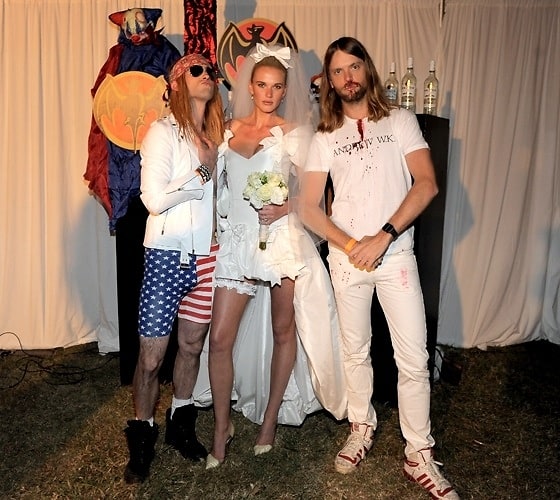 [Adam Levine as Axl Rose, Anne V, James Valentine as Andrew WK via] Perhaps you went the raver route, raged with Bag Raiders, kept it more lowkey on the Westside, or made it out to our insane Halloween Boogie, but where were our dear the celebrities partying to celebrate the holiday? Monday night, they were most likely at Maroon 5's annual Halloween party sponsored by Bacardi in Hollywood Forever Cemetery. We've been seeing some really awesome costumes in our party photos from all of these 'ween festivities so we expect nothing less from famous people with generous Halloween costume funds and personal assistants.

On a separate but related note, I'm thinking about starting a support group for those of us who braved novelty/costume stores over the weekend, so get at me if you're interested.

But back to this little cemetery soiree, on Halloween night Maroon 5 invited half of Hollywood to come party with them in the Hollywood Forever Cemetery which we've learned is quite the prime event space despite the inherent creepiness. The band did this properly, meaning, with lots of booze thanks to Bacardi and an In-N-Out truck. What more do you really need? Now let's have a look at the costumes celebs (and consider this your lucky day since that includes you, Tara Reid) chose for the party in the graveyard.