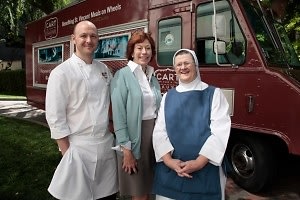 It’s Tuesday and I bet you still have plenty of sins to atone for after another hedonistic weekend in HellA (ok, maybe I’m projecting here). Perhaps you’ve already put a deposit down for that “spa retreat” in the desert. But what if I told you it was possible to save your soul and feed your face at the same time?

Welcome to Cart for a Cause and Perfect Pairings, both benefiting St. Vincent’s Meals on Wheels. I had the privilege of attending their kick-ass, kick-off events last Tuesday. These two karmic cuisine initiatives restored my faith in both humanity and LaLa Land-at-large. Plus, food phobic Angelenos now have a truly guilt-free dining option – take that, Jenny Craig.

First, I popped over to the leafy courtyard behind the Beverly Hills office of deal denizen UTA to check out Cart for a Cause, their charity chow truck program. Every Tuesday from now until the end of the year, you can help feed seniors by simply forking over $10 for a drink + entrée crafted by some of LA's hottest chefs including: Alex Becker (Nobu West Hollywood), Susan Feniger (STREET), David Myers and Dong Choi (Comme Ça), Vinny Dotolo and Jon Shook (Animal), Josef Centeno (Lazy Ox Canteen), Eric Greenspan (The Foundry), Nicholas Peter (Little Door) and Sal Marino (Il Grano). 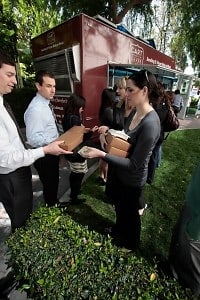 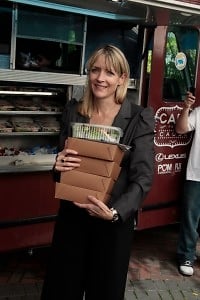 What’s really interesting is how this worthy wagon has managed to heal some of the wounds that the food truck phenomenon has inflicted on the LA restaurant scene. Many sustenance snobs would have scoffed at the idea of feeding the enemy with yet another sidewalk scavenger, but Alex Becker of Nobu, the inaugural chef at the launch, explained that this opportunity was special:

"It actually has a good purpose. There will be no typical tacos, burritos. We’re looking to keep it more intriguing. [Cart for a Cause] is bringing places that most people generally can’t eat at to the wider public. It really lightens it up a bit."

Ultimately, it’s the hip young patrons of St. Vincent’s Junior Advisory Board that convinced the city’s haute cuisine heavyweights that the roach coach revolution could be harnessed for good. As a LA transplant always on the lookout for the warm gooey center in this trendy Twinkie of a town, I was truly inspired by the founding board members who pulled off this non-profit tour de food in about 4 ½ months: Ed Choi (PUMA), Greg Sato (FIJI), Jane Yuan (Atelier Collective), and Andre Najjar (Atelier Collective). These chic and charitable cool kids prove that the moniker “City of Angels” is much more than an ironic t-shirt from Urban Outfitters. 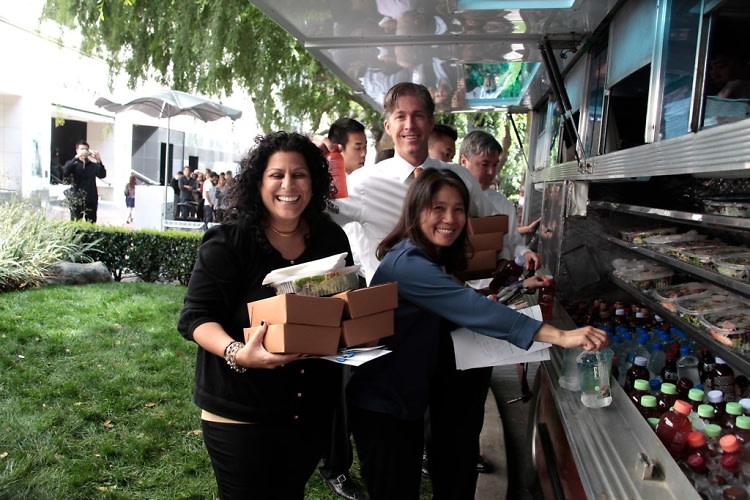 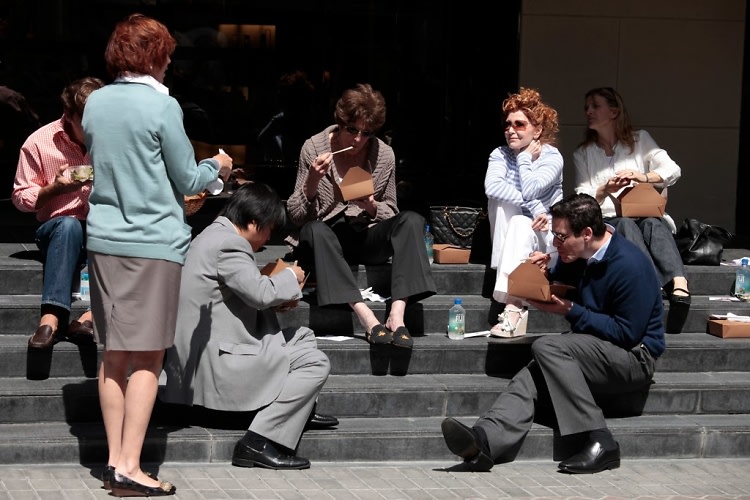 But the real superstar in attendance was Sister Alice Marie Quinn – LA’s much loved lady of the habit who founded St. Vincent’s Meals on Wheels almost 34 years ago and has dedicated her life to the cause. Executive Director Daryl T. Twerdahl described the street rep that Sister Alice has gained in the city through her years of selfless service (no, Paris, not that kind of service). For Sister Alice, it’s a simple concept summed up by her buddy Wolfgang Puck, who also throws a benefit for her chapter (I told y’all she’s connected), “It’s people eating who can afford it to feed those who can’t.” 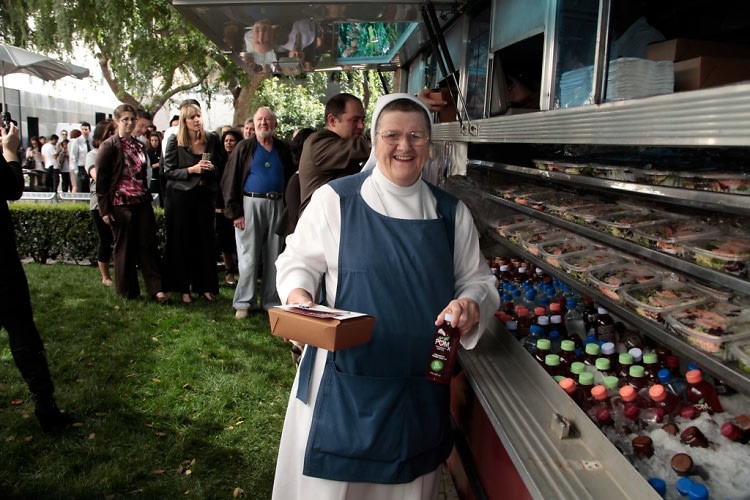 If all this weren’t enough, the St. Vincent’s gang topped off their Tuesday with the LA launch of Perfect Pairings at XIV on Sunset. 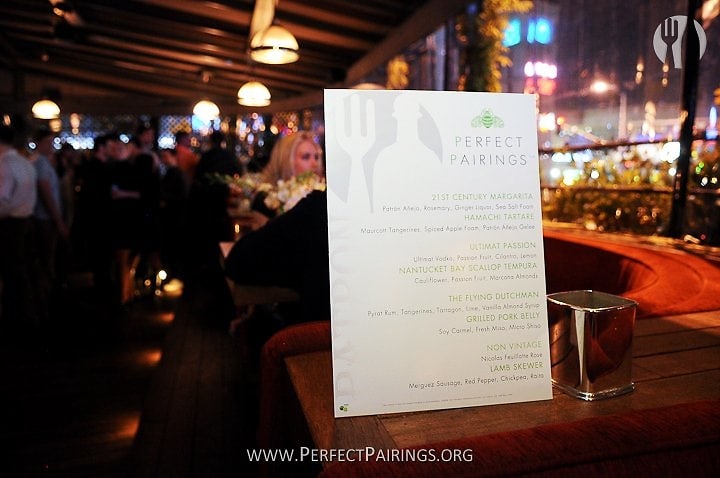 I stopped by the fete to say hi to my new favorite people and try out some flawless food + bev for myself. Through the amazing coordination of founder and Executive Director Kevin Mark Lodie, 50 top restaurants all over town will be tagging their menus with the Perfect Pairings fork-and-bottle logo for the entire month of April – whenever you order one of these dynamic dining duos, part of your bill will go directly to Sister Alice and the 2,900 seniors she helps feed. That’s true soul food, lovelies. 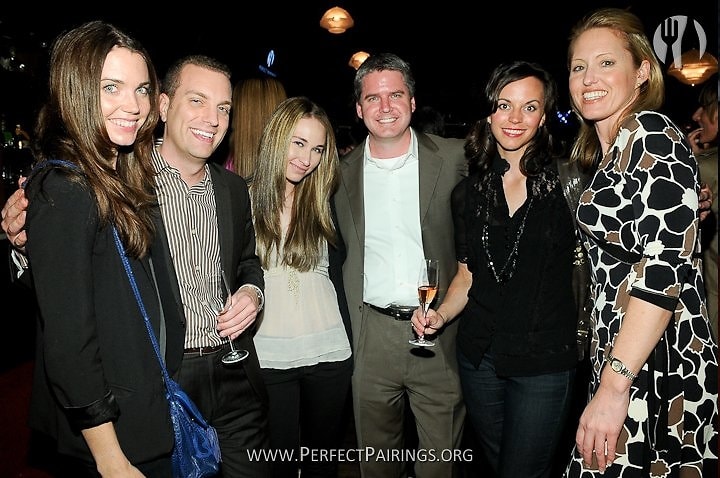 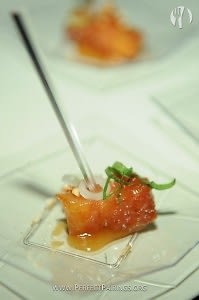 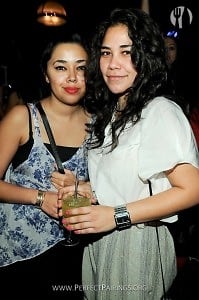 So get your pair on at this hit list of LA’s most wanted:

The Bazaar by José Andrés

The Blvd at the Beverly Wilshire

The Farm of Beverly Hills (3 locations)

FIG at the Fairmont Miramar

The Foundry on Melrose,

The Grill on the Alley (3 locations)

Parq at the Montage Philippe Chow

Finally, for all you Facebook fanatics, you can win a $50 gift certificate if you post 5 different wall shout-outs about your Perfect Pairing experience – check out the details here.  And TODAY, grab a true happy meal from Nobu's 2nd week with Cart for a Cause at 5900 Wilshire across from LACMA - yan can bridge generational, cultural, and gastronomical gaps all in one yummy to-go box! Don’t forget to follow the philanthropic foodies on Twitter so you can keep your finger on this city’s real pulse.