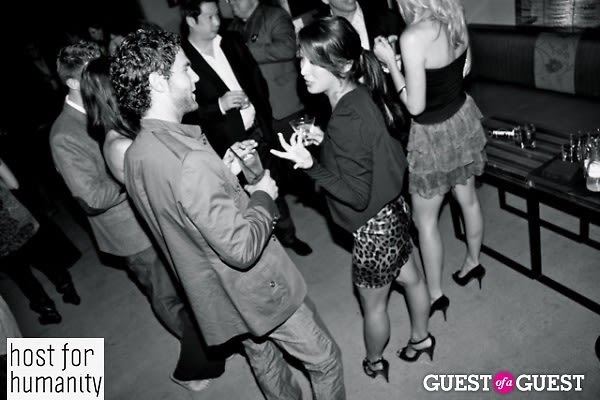 There's nothing quite like pleasure taken in a charity fundraiser. On top of that warm, fuzzy feeling you get from knowing that your weekly party money is finally going to a worthwhile cause, there's also that sense that the night is just a little more meaningful. The decor looks swankier. The food and drinks taste better. And the guests, brought together for a noble purpose, dress nicer, smile wider, and generally just open up a little bit more. In other words, it's the perfect recipe to class up your Tuesday night.

Last night, Host for Humanity kicked off its inaugural event season in grand fashion, raising money and awareness for CAST LA, an organization dedicated to combating the evils of modern slavery and human trafficking. With stylish West Hollywood destination Nobu playing the host, guests (including many French Tuesday regulars) were treated to a steady flow of the eatery's staples like rock shrimp tempura, heirloom tomato ceviche, and lychee martinis.

The crowd itself was a testament to the cause, as those in attendance were able to meet and mingle with some of the women rescued by CAST and hear their inspiring stories. Though the cause is no laughing matter, the atmosphere was festive; with California having just signed a strong new law fighting exploitative labor, everyone was in a mood to celebrate.

With its first effort a complete success, Host for Humanity promises a full calendar of gala events, each spotlighting a uniquely selected organization with a meaningful cause. If they keep delivering like this, it's a safe bet that we won't be the only ones coming back for more.