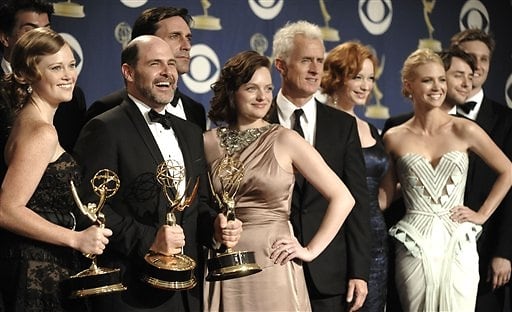 [Photo by Chris Pizzello for AP Photos via] It's that time of year again when the entire town turns upside down for the entertainment industry to congratulate itself with extravagant ceremonies so boring they make us weep. Oh wait, that's like, every three months...  This week the Emmys sweep L.A., but just because you're not nominated and your invite got lost in the mail again doesn't mean you can't get in on the action and have some fun. We've scoured the sources, talked to our "insider" friends (a.k.a. desk bitches) and gotten some hot tips from the lovely Jae Joseph to bring you a comprehensive list of all the parties, gifting suites, and all things Emmy happening this week for you to crash, because if you can't beat 'em, you might as well enjoy the open bar and score some swag.

*We'll be updating this as more invites roll in so check back or let us know if we missed something! 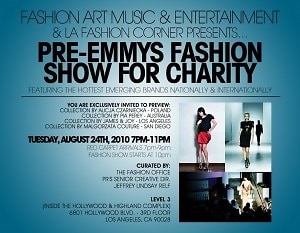 When: 7:00 pm Red Carpet Arrivals, 9:00pm Fashion Show Where: Hollywood & Highland, Level 3 Presented by F.A.M.E Los Angeles and co-sponsored by Charity Lives, this star-studded fashion show is set to cap off the 62nd annual Emmy Awards by showcasing some of the country's most exciting new fashion designers. The fashion industry's top models, wardrobe stylists and hair and make-up artists have donated their time and talent to the cause. The event will raise funds and awareness on behalf of the communities affected by the recent oil spill that occurred earlier this year at the Gulf of Mexico. Purchase tickets HERE

When: 11:00 am - 6:00 pm Where: Private Residence, Beverly Hills, CA Lo Bosworth from MTV's The Hill invites you to celebrate the EMMYS this Friday as they raise funds and awareness for Children Uniting Nations.

When: Friday, Aug. 27 Where: Spectra, Pacific Design Center The Academy will celebrate this year’s nominees by awarding them certificates at this annual Friday-before-the-Emmys bash that features dessert and drink from Duncan Hines, Beaulieu Vineyard and Grey Goose. Other co-sponsors include The Hollywood Reporter, Infiniti, People magazine and United Airlines.

Where: Sunset Marquis EW and WIF honor the 2010 female Primetime Emmy nominees with the help of presenting sponsor L’Oreal and sponsor Vitamin Water. Hollywood luminaries along with past and present nominees are expected. 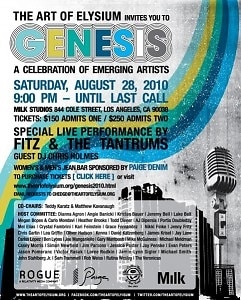 When: 9 p.m. Where: Milk Studios Genesis is a celebration of emerging talent. The evening will feature an original video art installation by Davida Nemeroff as well as live performances by Butch Walker with Jake Sinclaire, Fitz & the Tantrums and DJ Chris Holmes. Purchase tickets HERE

When:  2:30 p.m. Where: Hyatt Regency Century Plaza The British Academy of Film and Television Arts/Los Angeles hosts its eighth annual TV Tea Party in celebration of the 2010 Primetime Emmy Awards.

When: 8 p.m. Where: Century Park The Evening Before is held annually the night before the Emmy Awards to benefit the Motion Picture & Television Fund. This year’s theme is an end-of-summer barbecue, with Wolfgang Puck working the grill and rising DJ Michelle Pesce serving up the evening’s tunes. 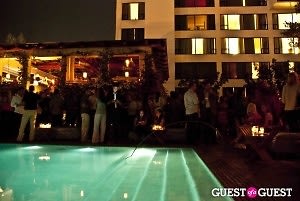 When: 6:30-9 p.m. Where: Skybar Showtime’s Matt Blank, David Nevins, along with Edie Falco, Toni Collette and the casts of “Nurse Jackie,” “United States of Tara” and “Dexter” are expected to nibble on Asia de Cuba appetizers, sip SKYY Vodka cocktails and listen to tunes spun by an in-house DJ.

Where: L.A. Convention Center, West Hall The granddaddy of all the Emmy parties — 3,600 guests are expected at what is recognized as the largest annual formal dinner in the United States — takes place in the L.A. Convention Center with food from Patina Catering, wine from Beaulieu Vineyard and spirits from Grey Goose Vodka. Patina will create confections using ingredients from official dessert sponsor Duncan Hines; the Culinary Institute of America will handcraft treats for the dessert lounges and parting gifts. Produced by Sequoia Prods., the theme, Celestial Heaven, is courtesy of designer Dwight Jackson. 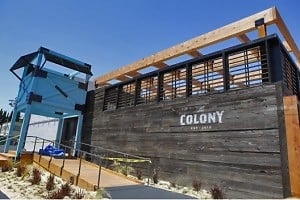 Where: The Colony Comedy Central talent and the comedy community will come together to celebrate Emmy night at a new venue, the Colony, which features a Hampton-inspired outdoor lounge space and new takes on traditional summer cocktails. Guests will also be treated to an array of classic comfort food and a tasting menu filled with some of Katsuya’s best bites.

When: 8 p.m. Where: Vibiana Grammy winner Cyndi Lauper will perform at the ET party, taking place for the second year at Vibiana, while DJ Samantha Ronson will spin tunes. Guests can expect a specially created Border Grill menu and bottles of Majesty Cabernet Sauvignon and Nuit Blanche from Bure Family Wines. A potential sugar overload, meanwhile, will be easily provided by Magnolia Bakery’s abundant dessert bar.

When: 8 p.m. Where: Cicada “Gold Rush Glamour” is the theme of this year’s bash and it’s carried out in everything from a golden (not red) carpet to a chandelier spilling to the ground with thousands of crystals. The casts and creative teams of “Glee,” “Modern Family,” “House” and “American Idol” will celebrate to the sounds of live music from Samantha Shelton and disc jockey Noah Passavoy. Vintage drinks such as Manhattan sidecars, slow gin fizzes and dirty martinis will be circulating throughout the night.

Where: Backstage at Nokia Theatre When: Aug. 28 and 29 Emmy host Jimmy Fallon and presenters are invited backstage to customize their own gift collection. In support of the donation P.F. Chang’s Home Menu will make to the Academy and its programs, each star who stops by will be asked to crack open a fortune cookie and reveal the favorite “frozen moment” of their career.

When: Aug. 26-28, 10 a.m.-6 p.m. Where: Sunset Tower Hotel With gifts being proffered from Marhcon Eyewear, Nina Skarra, the Argyle Salon and Spa, the Massage Express Co. and Millie’s Cheesecakes, among others, the DPA lounge is aiming to satisfy all the senses.

When: August 27 & 28, 11 a.m.-6 p.m. Where: SLS Hotel Luxury items — from trips, beauty products, fashion accessories and electronics — will be available for the taking. Nominees and presenters will receive, among other items, an Apple iPad and custom-made watches from Invicta Watch Group.

When: August 26 & 27, noon-6 p.m. Where: Private Beverly Hills residence The Creative Coalition, the beneficiary of the Style Lounge, will be onsite raising funds and shooting a PSA on media literacy along with the Girl Scouts of America, featuring celebrity and press attendees while at the Style Lounge.