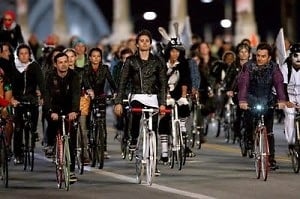 Bicycles: why would you ever want one when you have a car, right? There's no such thing as a bike with air conditioning, for example. But, if forced to be objective, I suppose I can admit that bikes are fun to ride, good for the environment, healthy, and convenient. Really, the biggest drawback to riding a bike is a-hole motorists like myself, who do everything short of throwing a full can of Coke at cyclists in my way when I'm in a rush. Well, I'd better get my act together, because under the new law passed by the L.A. City Council, cyclists are finally protected from me.

Championed by City Councilman Bill Rosendahl, the new ordinance makes it a crime for motorists to "threaten cyclists, physically or verbally," meaning that you might want to think twice about yelling out of your car window the next time Lance Armstrong cruises past you in traffic. The initiative is even going statewide, with the City of L.A. sponsoring a State Senate Bill (SB 910) which would legally mandate a 3-foot zone of protection for cyclists throughout California, with a potential traffic ticket as the prize for any motorist who tried to violate it. While this all may seem extreme, cyclists have often been in danger in our car-obsessed city, including a 63-year old downtown rider who was struck and killed in an apparent road rage incident the day the ordinance passed.

Of course, a healthy democracy requires a diversity of opinion, so here's the counterpoint: you can't YELL at assholes on bikes? Seriously? As anyone who's ever been caught in a Critical Mass can tell you, there is, without question, a segment of the bicycle population that considers themselves above traffic law, and will go out of their way to eff with motorists just because. Obviously, we all understand the need to avoid running these people over, because that's not cool, but when you take away a motorists' freedom to loudly curse at people from the car, you may be increasing the possibility of violence, not decreasing it. After all, there's basically already no experience more emasculating and dehumanizing than sitting in Los Angeles traffic; I can't fathom that not being allowed to yell will make that better.

Still, bikers deserve a level of protection that they were clearly not receiving, so good for them. Maybe I'll ride my bike to work one of these days. Just let me know when they hit a breakthrough on the whole a/c thing.