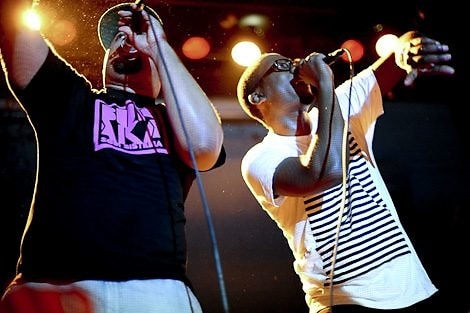 When Buraka Som Sistema recently brought their "kuduro" genre of music stateside at the Treasure Island Music Festival, we were lucky enough to sit down with them for some real-talk. If you're not familiar with this four-man crew, we're thinking it won't be long before you find yourself getting low in the middle of one of their booty-shaking live sets, whether it's a large-scale music fest or an underground show.

See what Portugal's rising hip-hop act that's already collaborated with artists like Diplo and M.I.A. had to say about their craziest fans, which L.A. party they never miss whenever they're in town, and finding their sound for their upcoming album in our exclusive interview.

[Photo by Tim Griffin for BrooklynVegan via]