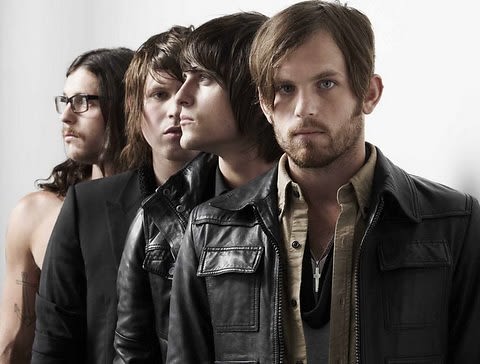 The Kings of Leon are the most aggressively mediocre band the world has ever seen. While this is not as bad as being an aggressively shitty band, like say, Nickelback, it does mean that they occupy that built-for-MTV realm of training-wheels rock music where, while I can't muster the energy to hate them, it's equally impossible to love them.

So what I'm trying to say is, I'm not taking the news that they're canceling their entire US tour over frontman Caleb Followill's reported booze problems all that hard.

Of course, based on the above video, it's not exactly a giant mystery what the deal is. Caleb looks disoriented (yes, in fairness, it was like 105° in Dallas during the show), tells the crowd he's going to go "vomit and drink a beer," and then stumbles off stage, leaving the rest of the band to awkwardly apologize and cancel the show, and eventually the entire tour. Now, US Weely ("Stars- they abdicate their responsibilities just like us!") is reporting that the rest of the band, led by Caleb's brother Jared, are trying to force him into rehab, with an unnamed source saying:

"They are trying to get Caleb to go to rehab. It is mostly for alcohol, [that's why] they ended up canceling the whole tour... he drinks like a fish."

With all due respect to Caleb's possible alcohol problem, which we hope he recovers from, the fact that a hot day and some drunkenness could keep these guys from playing out a multimillion dollar tour just reiterates how far rock n' roll has fallen. Do you think the Rolling Stones would have canceled a tour out of concern for Mick Jagger's drinking? Keith Richards was basically playing 20-minute guitar solos with a needle hanging out of his arm. Again, I'm not saying that this is a healthy or good thing to do, but I am saying that when you sell the public "safe" rock music, don't be surprised when they can't hack it as actual rock stars.

The one possibility that I can see in all of this? There seems to be some real frustration and anger on the part of Jared, who told the crowd to "f#@ing hate Caleb, not us," and then took to Twitter to vent further, we might have some real Liam/Noel Gallagher-type sibling beef on the horizon. At least when they stopped in the middle of a concert, there was always the possibility someone was getting hit with a cricket bat.