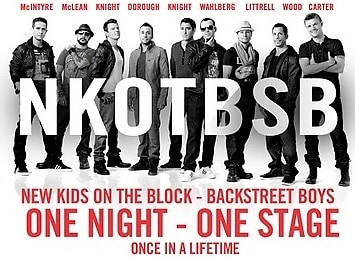 When two or more major entities merge into a single collaborative, anything is possible. Sometimes the result is productive, like when Rick Rubin produces Jay-Z, or the combination Pizza Hut/Taco Bell. Other times, you end up with something terrifying and hegemonic, like The Soviet Union. And then sometimes you've just got to shake your head in wonder at how something seemed like a good idea to anyone involved. Maybe it's too early to call, but that's kind of where I'm at with the "re"united NKOTBSB (yes, that does stand for New Kids On The Block + Backstreet Boys), a staggeringly insane 9-person "Man Band," if only because if someone is still calls you "boy" at the age of 45, you have bigger problems than music.

I would understand if this was the lineup for a support group, maybe some version of Fameballs Anonymous where a trained clinician works with these old, old men to help them realize that they're on the fast track to playing the 4H Barn at the Addison County Fair, but (deep breath) NKOTBSB has far bigger plans. Not only are they playing fairly major arenas across the country this summer (including Staples on July 1!!!), but they're planning to write and perform as one gigantic, nine-headed monster (I guess one of the Backstreet Boys died or something?), having already recorded two full-group songs. Worst of all, and it kills me to say this, they'll be defiling my childhood, and likely jinxing yet another Red Sox season, by playing Fenway Park. Yes, I get it, NKOTB was from Boston. So was The Boston Strangler. 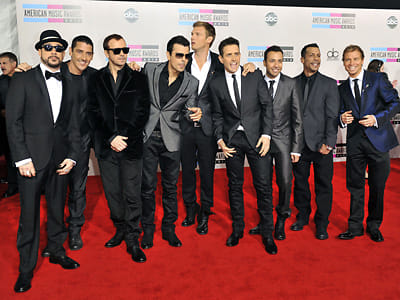 The real head-scratcher here, of course, is who exactly this abomination is supposed to appeal to. New Kids on The Block reached the apex of their game with the triple-platinum album Step By Step, which was released in 1990. Backstreet's own 13-time Platinum (that's not a typo) Millennium was released in 1999. By my math, that means that if you were a huge fan of both groups, you are a creepy middle-aged pedophile.

Check out the website for more information, to hear the songs, or if you want to see what someone looks like 15 years after their 15 minutes of fame are up (hint: not good! [Editor's Note: Hi, Donnie Wahlberg.]).