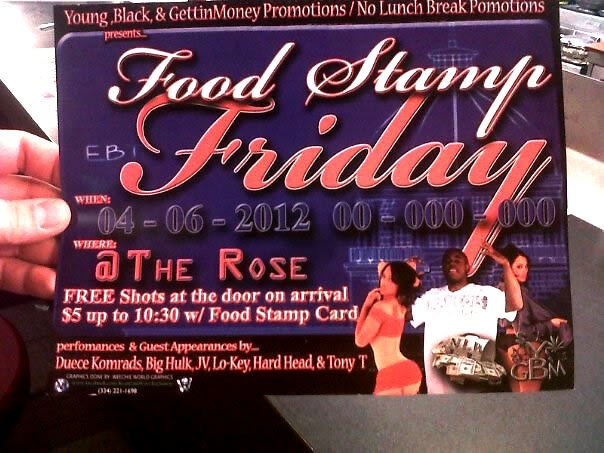 There is generally no need to look beyond L.A. for a full dose of horrendously bad decision-making in nightlife. But sometimes you have to venture beyond the Blue States to find something so staggeringly ill conceived that it makes you question the entire concept of nightlife altogether. Today, I'm talking about The Rose Supper Club in Montogomery, Alabama, and their breathtakingly bad idea to celebrate Food Stamp Friday which gives patrons free shots and a reduced cover charge for flashing their food stamps at the door.

Indeed, as the flyer shows, on April 6 Rose Supper Club hosts their truly astonishing 'Food Stamp Friday' party offering a reduced $5 cover charge and a free shot upon entry at the door to clubbers who bring their food stamp card. Now, let's get one thing clear off the bat: I'm actually not opposed to the idea of giving reduced cover at a party to people who receive government assistance. If you are, you're basically saying that poor people don't deserve to have to fun, and 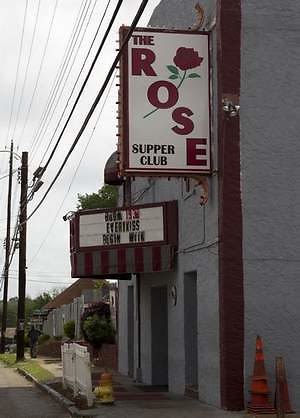 that would make you an asshole Fox News commentator. In fact, Food Stamp Friday is in much, much better taste than, say, Foreclosure Friday. And anyone all hot and bothered about people living beyond their means while on the government dole should probably see how many private jets Citigroup bought with TARP money. But this is not to suggest that Food Stamp Friday is in good taste. I'd say the amount of purple on the flyer alone definitively proves that it is not.

But who knows, maybe this is the shrewdest marketing move ever for The Rose Supper Club. After all, a whole lot of people are talking about Montgomery, Alabama, which should bring extra national attention to their "sinking riverboats" problem. There's always the possibility this will make Rush Limbaugh choke on a mayonnaise packet and go into a coma, which I'm sure we can all agree would be a good thing. And I still think I'd probably rather go here than our Supperclub. At least we know the drinks are affordable.