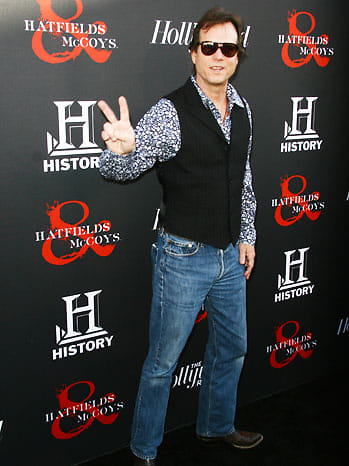 Kevin Costner, Bill Paxton, Jena Malone and many other stars attend the screening of the high-profile, megabudget "Hatfields & McCoys" miniseries premiering on The History Channel; Pixar visionary John Lasseter and other big names in digital art and animation convene at the Samuel Goldwyn Theater to discuss the history and future of their field; Disney Star Daniel Curtis Lee celebrates his 21st with a bash on Hollywood & Highland; Hank Baskett hosts an athlete-packed charity golf tournament to fight lung cancer; and socialite and southern belle Tinsley Mortimer celebrates the release of her debut novel at the Trina Turk Boutique. Monday night's parties clearly had a little bit of everything, so read all about it in this edition of Last Night's Parties!

Bill Paxton at the "Hatfields & McCoys" Premiere [via]