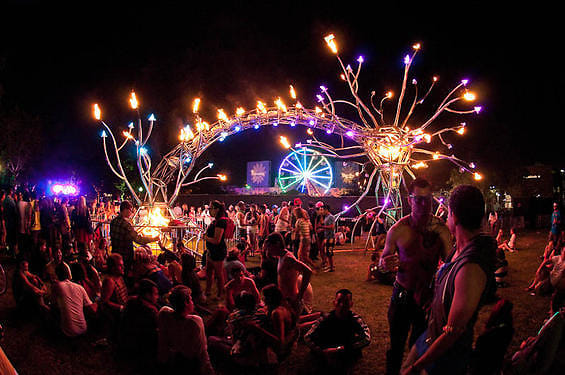 For thirteen years rave junkies have been uniting to celebrate "blooming beats, funkified freaks, and full sized carnival rides" at the Electric Daisy Carnival. This year, LA's finest certainly came out in full force, decked out in tutus, bunny ears, and wardrobe stolen from Lady Gaga's closet on crack.Yeah, we weren't kidding about the "funkified freaks."

DJs and electo acts such as Kaskade, Deadmaus, Moby, Steve Aoki, Travis X A-Trak, put ravers in a trance for over 12 hours and encouraged fist pumping, mass moshing, and some good body flailing. Ravers liberated their minds and bodies with costume, glow sticks, and... lots of Molly.

As if things weren't trippy enough, EDC came fully equipped with carnival rides and fireworks. What better way to get a crowd of people rolling, literally. Certainly not the place to be if you're claustrophobic; EDC housed almost 185,000 people collectively over its 2 day stint in the city of angels. With all the peace and love people were preaching, there were still quite a few catastrophes, sending over 100 people to the hospital and leaving more than 200 with EDC battle wounds.

The rave lived up to its reputation from years past and proved that in its teenage year, it still holds the record of being one of the raddest, most psychedelic music fests/carnivals out there (not that we know many others competing in this category). Some people called it the best night of their life, others a "utopian society."  One thing's for sure, this past Sunday was surely LA's largest day for rest and recovery.

[All photos by Timothy Norris for LA Weekly via]