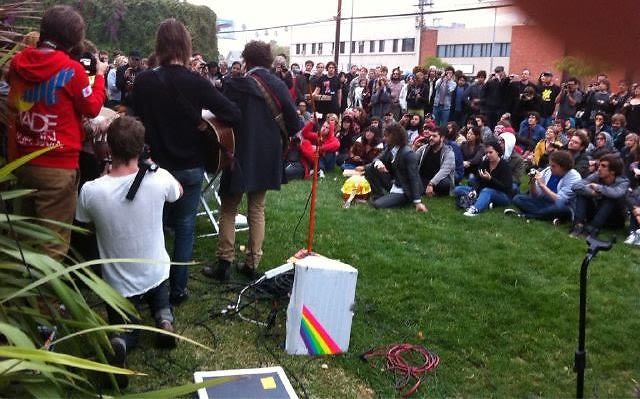 I take back ever saying that nothing good happens before 8am or before I've had my coffee. This morning while many of us were performing our daily ritual of repeatedly hitting the snooze button and cursing this hump day, in-the-know locals gathered at the Hollywood Forever Cemetery for a semi-surprise free 6am sunrise performance of "Do You Realize" by the Flaming Lips and Edward Sharpe & The Magnetic Zeros.  If it weren't for the video (below) and photos, I don't know if I would have believed it happened either. [Photo via] 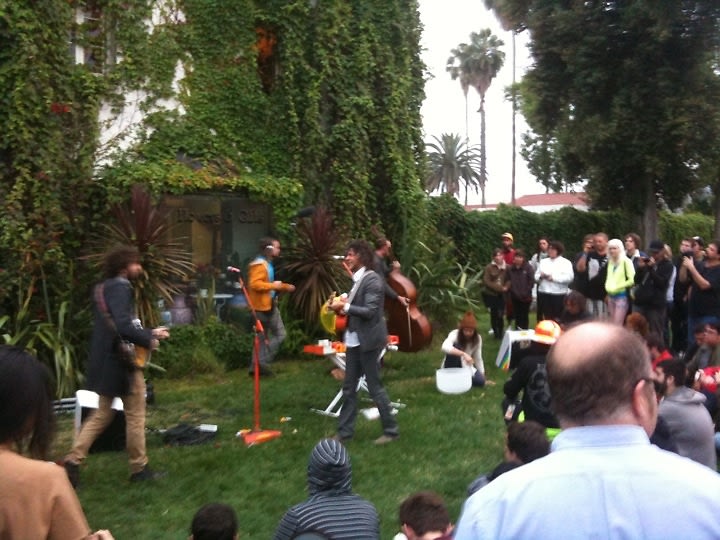 [Photo via] When flyers and announcements for the Flaming Lips' two-night stint of performing their album The Soft Bulletin and Dark Side of The Moon at the famed graveyard emerged, it was curiously advertised as "two nights, one morning." Tickets for the two evening shows, the first of which went down last night, were available, but the suggested morning was unaccounted for leaving the masses to sniff out hints and leads for this morning's free show. Taking advantage of the rare opportunity to take over a graveyard where such famous entertainment figures as the Ramones and Rudolph Valentino have been laid to rest, the Lips went for it and decided to do an extra sunrise show for free with the Edward Sharpe clan. As the Lips' Wayne Coyne put it for his early-rising audience:

"Well, we didn't know if we'd ever get another chance to play in a cemetery. So we thought we'd make the most of this simple statement. I feel like the more we realize that this moment we're having here is kind of a special temporary thing, the more we're able to really seize this. Let's make it good, let's make it meaningful, and share it with our friends, and... just be glad it didn't fuckin' rain."

The morning crowd congregated around the cemetery's bell tower where Lips bassist Michael Ivins rang the bell for the special collaborative rendition of their song "Do You Realize" with Edward Sharpe & The Magnetic Zeros. Check out the video below to see this morning's performance:

Kinda magical... If you missed it, and even if you didn't, you still have the chance to catch either of the bands tonight. The Flaming Lips play the cemetery again tonight and I'm thinking the show will involve some kind of special surprise, while Edward Sharpe and the Magnetic Zeros perform at the Paramount Lot for the Billabong Design For Humanity event. Get there!