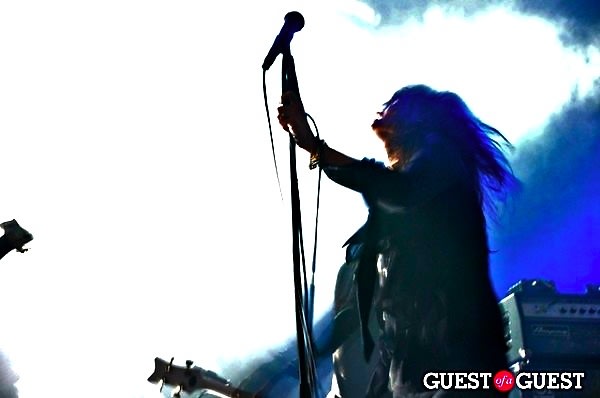 Go HERE for more photos by Evan Dumouchel and tag yourself and your friends!

Thousands of waving arms topped off the surface of the crowd last night at the Hollywood Palladium when bands Harlem and The Dead Weather appeared before them for a night of electric performances.

The two bands are currently touring the states together, and finally hit L.A last night to please a room full of excited fans. Harlem, known for putting on awesome live shows, far exceeded the crowd's expectations. The group gave the audience exactly what they wanted to hear in a phenomenal performance, sounding even better live than on recordings. Fans rushed the stage, cheered and belted along throughout the set as the band rocked out like they were in their garage with nobody watching.

After Harlem bid the crowd farewell, The Dead Weather took over the stage to deliver an unforgettable set. Although formed just last year, the group has a fiercely loyal following due to the its members' past exploits in rock. The four-piece band includes the eminent Jack White, Alison Mosshart of The Kills on lead vocals, Dean Fertita of Queens of the Stone Age on guitar, and Jack Lawrence, band mate of White's in The Raconteurs, on bass.

For those who caught their epic performance at Coachella in April, this was yet another stellar music experience.  The band took the audience on a radical sonic journey that will surely leave their ears ringing for the next few days, and was totally worth it.