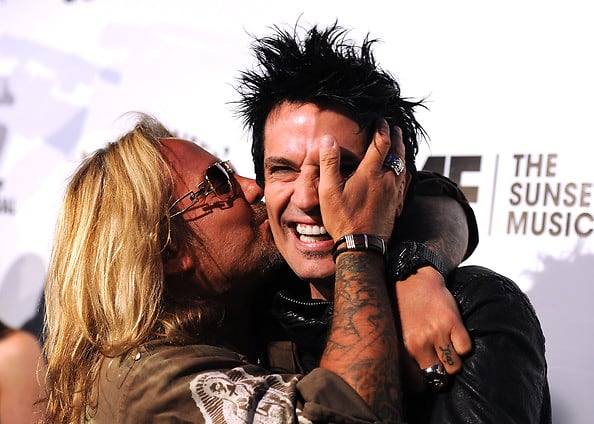 [Vince Neil plants one on Tommy Lee via] Don't be alarmed if you see an inordinate number of black leather-wearing, pierced gnarly dudes and their babes spilling into the streets of West Hollywood this weekend, it's just the 4th Annual Sunset Strip Music Festival. The weekend celebration of the drag that's been a vibrant hub of L.A.'s music scene for decades holds a stacked lineup of shows by big artists like Bush, Public Enemy, and headliner Motley Crüe as well as local up-and-coming groups.

To kickoff the fest, last night Motley Crüe was honored with a VIP roast and tribute at the House of Blues where rockers such as David Johansen of the New York Dolls, Semi Precious Weapons, and Buckcherry came out to toast the legendary band. In fact, this town has so much love for the Crüe, West Hollywood has declared August 18th Motley Crüe day. Check out who rolled out for last night's kickoff event.