Okay, haters. Let's get this out of the way right now. I am officially a Justin Bieber fan. Sure, before I had ever actually heard his voice (which incidentally sounds like a million monarch butterflies making love), I was wise cracking about his Ellen Degeneres likeness. But then the biggest adolescent advertising zit zap ever was secured: Biebs was going to be their new Proactiv spokesboy. When the news finally broke in schoolyards across the country and much of pre-pubescent America peed their collective weekday-themed panties, I figured I better google him. I watched one video. And then I watched another. And another. I had the BIEBER FEVER.

When Proactiv graciously invited me to witness the miraculous JB revival at the Staples Center, I promptly cleared my calendar of all adult activities. It was time for a full immersion in the tiger beat heat. Let me tell you sad saps who never let your inner tween take over, Biebs & Co. did not disappoint.

Before I even got out of my car, I could feel the teeny bopper buzz of biebgasms building in the atmosphere. Upon approach of JB HQ, I was accosted by the full force of the Bieber Battalion: militant mini minions carrying homemade signs covered in pink lipstick kisses and proudly donning a uniform of sequins, glitter, and tutus. Warning: do not get between this guerrilla girl force and their JB merchandise – you will get a flashing neon light saber in the eye socket.

That said, I was more than a little thankful for the safety and security of the plush Proactiv VIP Suite. From our perch, I could look out over the throbbing teen dream scene without having my eardrums blown by 20,000 pterodactyl screams. I watched in awe as opening acts Burnham, Jasmine V, and Sean Kingston expertly administered pop pharmaceuticals to the jonesin' Justin fangirls. Although, all they really had to do was say, "Who wants to be Bieber’s girlfriend?" and the entire arena would shake like the big one had finally hit. 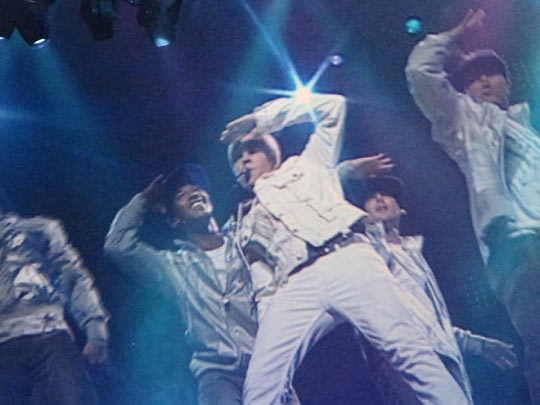 By the time the countdown clock ticked away to 0 and He Who Must Be Youtubed finally took the stage in an all-white ensemble that hilariously highlighted his middle school muscles, the pandemonium was at full blast. The Bieber slid his purple sneaks across the stage in MJ-inspired dance routines, sent tiny musical love notes to every girl in the crowd, and even strummed a guitar from a floating heart. At this point, most of the females in the crowd had spontaneously combusted into fairy dust. (Luckily, David Beckham and his three little boys Romeo, Brooklyn and Cruz, who were in attendance, all survived intact.)

But Justin wouldn't go easy on them – he worked that crowd of lovesick ladies like a seasoned pro. That kid knows his demo – and he also knows some special back-up dancers. Not only did Bieber's mack daddy mentor Usher make moves during the mayhem, but both Jaden and Willow Smith brought their sibling star power to fuel the fire. It was like friggin' MTV Daycare up in that bitch. Even before Biebs raucous encore of "Baby," I had already resolved to whip my hair the whole way west on the 10 in honor of the unparalleled power of pop. So many thanks, Proactiv - this neck brace looks really awesome with my Justin Bieber silly bandz.