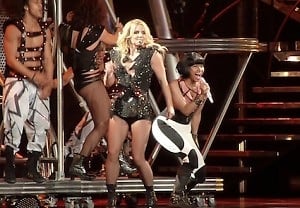 A Britney Spears concert must have the same feeling as attending one of Ronald Reagan's last speeches. There's a simultaneous feeling of iconic awe and bittersweet pity, and whether you loved or hated Ron/Brit in his/her prime, the sense of historical importance would compel you to attend. That, and the possibility that you might see an onstage pants-wetting.

Well, Britney played Staples Center last night, and while we have no confirmed reports of pants-wetting, we do have several tweets that suggest that it was the limpest performance in this particular venue since the Lakers went 2-for-20 from 3-point range on their way to getting swept by Dallas.

Remember how Britney used to have those sexy, acrobatic dances that made teenage girls dream of being her, and sent teenage boys running for the hand lotion? Yeah, hold on to that memory, because it doesn't seem like Britney's got the dancing bug anymore. Comedian and friend of the site Iliza Shlesinger reports:

@iliza: Britney I love you but I move more in my car than you do on stage

Iliza also snagged a picture for us of Brit, in the reclined position:

@iliza: Here's britney on the way to laying down..and being pulled on a sofa

There was a ray of hope:

@iliza: BRITNEY MOVES!!! FINALLY! CLOSING NUMBER! She saved the best for last! I LOVE YOU BRITNEY!

But then, all was lost:

@iliza: Oh i spoke too soon-now she's taken to just standing and pointing

@iliza: And she finally grew wings and in the ultimate act of laziness-THEY carried her offstage

It seems she spent a lot of time sitting back and/or being carried, while the choreography she used to perform herself was left largely to the backup dancers. Others agreed:

Now, I'm new to Twitter (that's my way of saying FOLLOW ME), but I'm reading that to mean ol' Brit has enough good will built up amongst a certain segment of her fandom that the subtle decline of her enthusiasm and ability is being, shall we say, intentionally overlooked?

Of course, not everyone's willing to cut Britney that much slack:

@louisvertel: Oh no, a lampshade fell over in my room and it was better than the Britney Spears concert tonight.

And some people were turned off to the idea of attendance in the first place:

@moshekasher: A bunch of women I used to love and respect are currently at a Brittany Spears concert in LA.

So there you have it folks: the greatest real-time use of Twitter since the Egyptian uprising. Just remember, if you ever find yourself at an epochal event, be it political revolution, Britney Spears concert, or seeing Kid Rock at a Waffle House, never hesitate to splash your most half-formed thoughts about it all over the internet. You're not doing it for you—you're doing it for history.