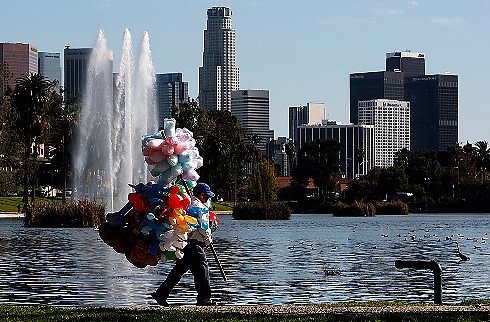 I recently read an article that noted the surprising number of people fishing at Echo Park Lake in the morning. And then I called my therapist. Do you have any idea what kind of abhorrences lie hidden in that swamp which hosted an aggressive fatal fish herpes outbreak not too long ago? Somebody call a priest because we may soon find out now that it's in the process of being drained for a two-year cleanup. As Curbed pointed out, locals are already taking bets on how many dead bodies they find once it's emptied. [Photo by Luis Sinco for LA Times via]

Here are some tweets they pulled which capture the sorts of feelings the community is experiencing in reaction to news of Echo Park Lake's draining:

Here's another one we found:

Now does the idea of people fishing in that thing upset you? The entire park will be closed for what is projected to be a two-year cleanup project which, if they're actually committed to the goal of cleaning it up, will involve explosives and some kind of ritual smudging. And it probably wouldn't hurt to toss in some Valtrex. Although we may never know the exact number of dead hookers in there, at least we'll have a fresh grave for some new ones a cleaner, STD-free lake to to defile once they're done.