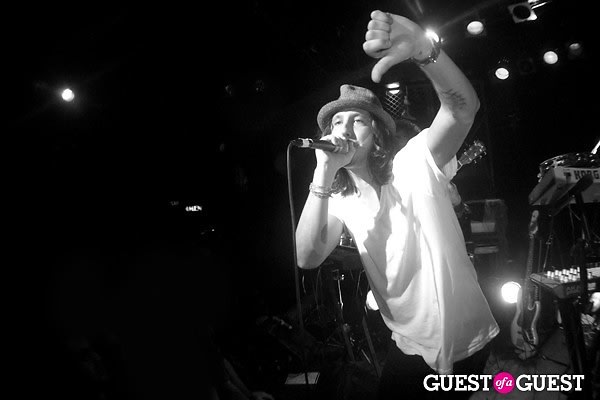 You may know him for his literally massive balls or dating Mischa Barton when she peaked and was still relevant circa "The OC" days before things turned tragic. But Cisco Adler is a true musician on the rise. And no, you guys—it has nothing to do with the fact that his father is a legendary rock producer and founder of The Roxy where his new solo project, Cisco Adler and the Pigeons performed last night.

Cisco started off as the frontman of band Whitestarr where he joined forces with fellow son of a music legend, Alex Orbison. He later left that gig to join forces with hip-hop/pop artist Shwayze, who brought us singles like "Buzzin" and "Corona and Lime", both of which fell short of the top 20 on Billboard's Hot 100 chart. So they did what any self-respecting celebrity looking for a star-making major breakthrough would do and got a reality show.  How else do dreams come true?  However, when the duo filmed MTV's "Buzzin", it wasn't exactly the nudge to stardom they may have been hoping for. (Note: several members of our team insist on killing their braincells by watching every mind-numbing show on MTV and never saw it, if that means anything...)

Cisco has since been working more behind the scenes as a producer for artists like Dirt Nasty and Mike Posner and developing new artists. BUT it looks like Cisco's latest musical endeavor could be his big break into the spotlight. Cisco Adler and the Pigeons made its debut on the music scene at this summer's Sunset Strip Music Festival—and we're kinda into it! Have a listen. With the pop-rock, upbeat sound and catchy melodies, the songs might even help you get the image of Cisco's mighty balls out of your head. At least temporarily.