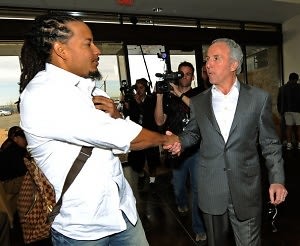 The sad, strange story of Frank McCourt's tenure as owner of the Dodgers took another turn yesterday, as the team filed for Chapter 11 bankruptcy. Naturally, the question on the minds of Angelenos, as well as sports fans everywhere, is how? How does one of the most storied franchises in professional sports end up at the mercy of a bankruptcy judge, begging for handouts from investors and hanging in the balance of a divorce settlement between an awful, spoiled man and his awful, spoiled wife? How could the Dodgers be losing money? Well, owing Manny Ramirez $21 million probably doesn't help.

That's right, as part of the bankruptcy filing yesterday, McCourt listed one Manuel Aristedes Ramirez as the team's largest creditor, with $21 million in deferred salary due by the end of the week. In Frank's defense, anytime you can give a $45 million contract to a guy who spends most of his time injured or being suspended for using steroids, you've got to jump at that. At least that's a baseball expense. But the reason Frank is in such hot water isn't simply because he overpayed a large Dominican man to hit a ball with a stick. It's because he and his loving wife Jamie used the Dodgers—to quote one of their family advisers—"like their personal credit card," leveraging team assets to support a lifestyle that makes Kim Kardashian's wedding registry look almost reasonable.

So here's a look at the five most absurd expenses—both personal and professional—that have brought the McCourts and the Dodgers to the brink. 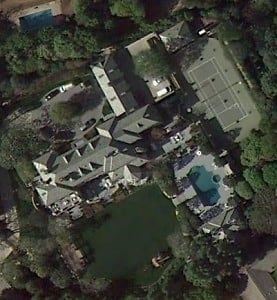 Jamie McCourt likes to swim. That's cool, right? I mean, swimming is fantastic exercise, it's relaxing, it's clearly good for your skin, so what's not to like? I'm guessing that was the logic when Jamie plunked down an additional $14 million (that's in addition to the $21.25m purchase price listed above) to turn the outdoor tennis court of the Holmby Hills mansion in the picture into an Olympic-sized indoor swimming pool with its own pool house, sauna, steam room, and massage room. And while this would hardly be the only $30 million mansion in Holmby Hills, it might be the only one that's only used for the pool.

That's right. Post—separation, this 15,000 square-foot palace is being maintained by Jamie "exclusively for swimming," according to Frank's attorneys, while she lives in a separate beachfront Malibu mansion that used to belong to Courtney Cox and David Arquette (love must have been in the air!). Of course, only having one olympic-sized swimming pool is like only having one pair of underwear, so Jamie's been filing plans with the Malibu city office to expand the pool at that location and put in a snazzy wood deck and private cabanas.

Of course, none of this is cheap, which would explain why one of the centerpieces of the divorce proceedings is almost $750,000 a month in mortgage payments on their private homes. Hey, Jamie, Equinox has a lap pool, and if you tell them I sent you, they'll totally waive your induction costs and I get a month free! Win-win! 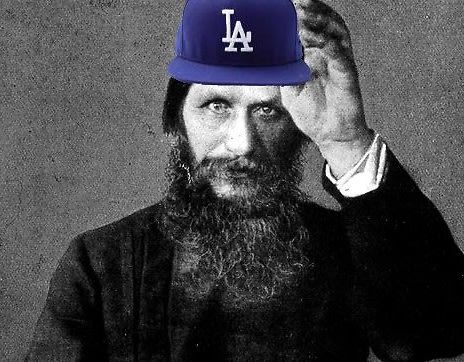 But hey, real estate is an investment, right? Kind of like paying a 71-year old Russian man to think positive thoughts about your baseball team?

Oh wait, I'm not sure what that qualifies as. Abject lunacy? Maybe we should ask Frank, who as we reported earlier employed an elderly Russian "scientist/healer" named Vladimir Shpunt to watch the Dodger games at home (in Russia, natch) and channel his positive "V energy" to the team. Now, to be fair, much of the reported six figure payout was in the form of a bonus, dependent on the team's regular season performance and how well they did in the playoffs. Unfortunately, it seems to have been based on winning the National League West, as opposed to oh, say, the World Series. Perhaps having realized how utterly ridiculous this all sounds, Frank's been keeping much more quiet about the voodoo priestess I heard he hired to make sure Jamie has an "accident" during her lap swimming. Is this why he tried to subpoena a lock of her hair? [photo via]

Say what you will about Manny Ramirez, but at least he swung a bat for the Dodgers in the last 10 years. Part of Frank's ever-deepening financial hole was the way he creatively structured his assets, separating every facet of the team's expenses in order to maximize the amount of money he could borrow against and delay repayment as long as possible. All of which is by way of explaining how the Dodgers could still owe money to Marquis Grissom, who is 44 years old, retired five years ago, and last wore Dodger blue when I was still in high school.

Though there's no denying that Marquis was a hell of a player, there's also really no good reason why he should still be owed money on a Major League payroll. I'll put it like this: when Marquis made his first All Star team in 1993, he was on the same roster as Tony Gwynn, Sr. Come Thursday, one of the current Dodgers that Frank McCourt will owe money to (albeit an affordable $675k): Tony Gwynn, Jr. [photo via] 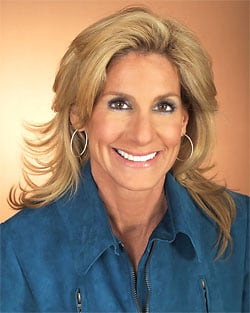 Look, I'm not even going to say that Jamie McCourt has bad hair. Check out the photo; she's got a kind of flowing, Pride of the Savannah thing that makes her look youthful and majestic, like a lioness or maybe a professional wrestler. But here's where the issue comes in: in her filings for spousal support, Jamie has claimed that part of the $1 million a month she's seeking is the $10k a month she spends on hair styling. That's right, ten thousand dollars, every month, for the Power Mullet you see in the picture right here.

Jamie, I don't presume to know what went on inside of your marriage, and by all accounts, your soon-to-be ex-husband is as much of a donkey as you are, but surely, certainly, there's a way to get that haircut without dropping 10 G's a month. What if you put your face in front of a giant fan, and only cut the part that blows back the farthest? What if you bring a photo of Brett Michaels to your local Aveda training salon and tell them to get it as close as possible? Because frankly, that looks like a $4,000 haircut at most. And just because you're rich, that doesn't mean you should ever settle for being ripped off. [photo via] 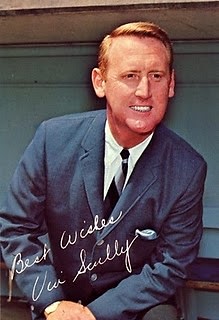 Of all the painful financial revelations made in the wake of the divorce and bankruptcy, none are perhaps more disheartening than the thought that the Dodgers are stiffing the absolute heart and soul of the team, legendary announcer Vin Scully, to the tune of $152,000. Scully, who has spent 62 seasons with the Dodgers starting when they still played in Brooklyn, is one of baseball's few "institutions" that's as good as advertised, a tireless announcer with an unmistakable voice who works alone, monologuing every pitch with style, energy and wit.

Naturally, you'd think that such a treasure would be worth taking care of, but I guess the Russian Wizard needed some new energy crystals or something, because the Dodgers owe Vin $150k, or 1/10th of what they still owe Andruw Jones (career batting average as a Dodger: .158). Seriously, in terms of bad karma, a ticket to whatever Hell you believe in, or simply communicating to Dodger fans everywhere that you couldn't give less of a shit about their favorite team, this one takes the cake.

And as payback, on the day that Bud Selig (who is also a tremendous asshole for selectively cracking down on the Dodgers while letting the equally incompetently run Mets twist in the wind) wrests control of the team away from the vain, awful McCourts, as Frank once again nails himself to the cross in the media and claims that all of his problems were someone else's invention, maybe Vin himself, in the privacy of his own home (he's way too classy to say it in public) could drop his famous home-run line on Frank. "Forget it," Frank McCourt. That ball has left the yard.