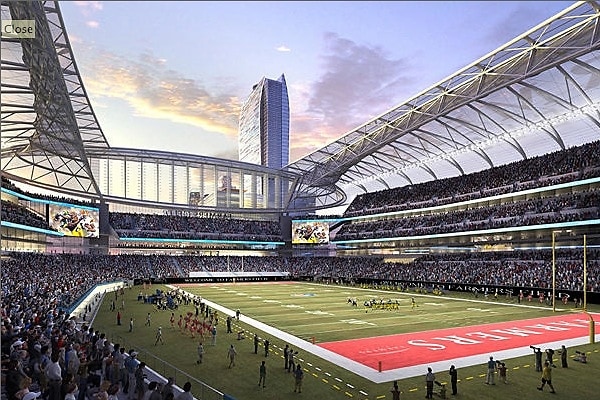 Since the main demographic of this site is people looking for news about Kim Kardashian and the things that are often put inside of her, I'm guessing we have at least some football fans in the audience other than yours truly. Therefore, I can't possibly be the only one who's thrilled for the 72,000 seat, $1.2 billion NFL stadium that the City Council approved earlier this week.

And football fan or not, you really ought to be excited: NFL games are daylong parties, after all, and we never say no to a high-profile party around here. But there's a right way, and a wrong way, to do it. Some suggestions. 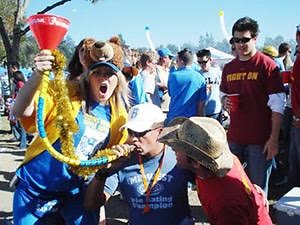 We already support two major college football teams, so it can't be said that we have no tailgating experience. However, since both USC and UCLA play their home games off-campus, recent years have seen crackdowns led by the schools and venues on tailgating in attempts to reduce the number of alcohol-related incidents. An NFL team has no such concerns, on the other hand, and as Tim Pawlenty noted in last night's Republican Comedy Hour "Candidate Debate", God Himself descended from Heaven to give Americans, and only Americans, the right to grill, fight, and drink excessively hours before an arguably unrelated sporting event. Actually, he probably didn't say that, but I started blacking out after Michele Bachmann tried to blame the S&P rating downgrade on the Democrats, so I don't remember much. Anyway, my point is, tailgating is absolutely awesome, and often superior to being inside the game itself. So let's make sure we build a giant, lawless parking lot.  [photo via]

Wrong Way: Bringing In The Raiders 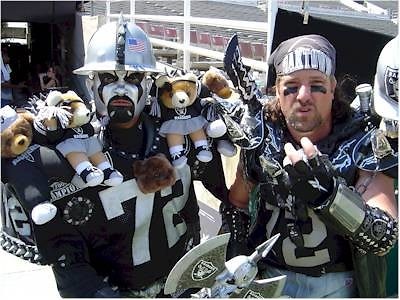 Look, I know our city has some history with Raider Nation. Bo Jackson and Howie Long both played in L.A., and that's awesome and all, but believe me when I tell you that we want nothing to do with legally insane (and possibly legally dead) Raiders owner Al Davis, and even less to do with Raiders fans, who are so uninspired by their awful team that they choose to focus primarily on stabbing one another.

Look at these two supposedly grown men in this photo. This is the face of untreated schizophrenia. Why, in God's name, are there a bunch of freaking teddy bears on your shoulders? Actually, don't answer that. The only good thing about Raiders fans is that it's really safe to take your small children to church on Sundays in Oakland, because you already know where all the registered sex offenders are. So bring in the Rams if you want nostalgia, bring in the Chargers if you want to win, or hell, bring in the Jaguars if you want a trashy team with trashy fans, but for the love of God, leave the Raiders, and Al Davis, the hell alone.  [photo via] 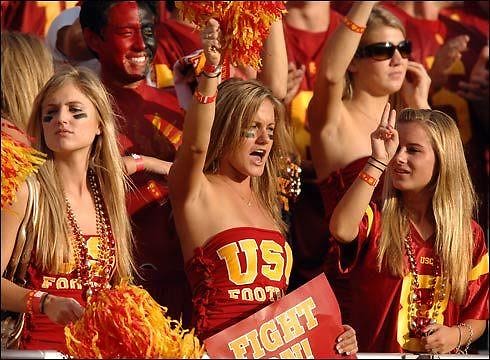 I've teased USC once or twice for their University of Spoiled Children, bro-factory image. I'm not at all backing off from that. On the other hand, they seem to do some things a bit better than their crosstown rivals, including pumping out a steady supply of both NFL players and the attractive women who cheer for them. Therefore, I think we should probably start our search for both our players and cheerleaders with the Trojans, and move on from there. Sorry, Bruins, I love you guys more as an institution, but we've got to win, too. [photo via]