[Photo via] Today, the iPhone 4 epidemic 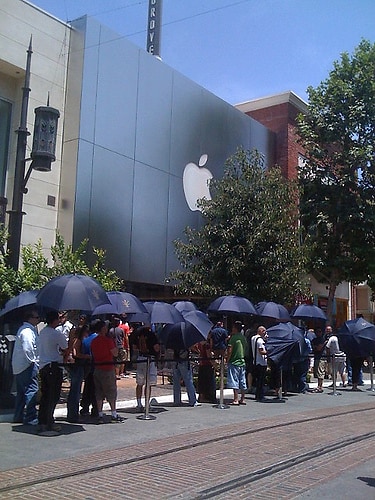 swept through LA quicker then we could say "swine flu." Techy trendsetters anxiously awaited the release of their beloved new gadget like fathers-to-be in a waiting room. We suspect there were more men gathered outside of Apple stores then there were at any of the local bars for the World Cup Games.

Of course, the social media scene clued the world in their opinions, findings, and basically an overshare of emotions.  Our favorite tweets include one from the CEO of Apple, Steve Jobs who asked users to kindly "Take care of his baby" but also poked fun at AT&T and their reception, possibly attempting to fuel the fire for more rumors of iPhone extending its "exclusive" social circle to non-AT&T users. :

I heard the CEO of AT&T got married recently. The service was great but the reception was terrible. about 9 hours ago via Twitter for iPhone

Although many would expect disgruntled citizens, it appears that the majority of users were appeased with their grand prize...wait for it....the iPhone 4. Yup, some people waited nine, ten, or more hours. Supplies such as water and snacks were flown in for the desperate huddled masses until these gadget geeks could get to their interpretation of the holy grail.

All in all, the iPhone line is a spectacle for your average human being, but for iPhone fanatics, nine hours is soooo worth it.  We think Cole Rich who waited in Santa Monica sums it up best with his timeless expression: 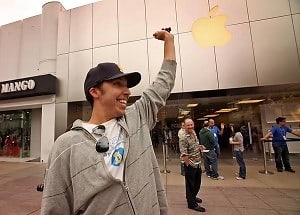 "It's better than losing your virginity."

We can't be held accountable for the actuality of this statement, as we're not 100%  convinced that Cole Rich has lost his virginity.