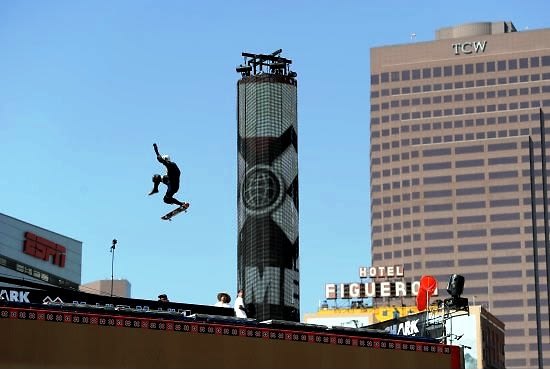 How's the weather up there, buddy?? Bob Burnquist flies through the air downtown above L.A. Live during a skating event at the summer X Games 17.

Burnquist is one of just four athletes that has competed in every one of ESPN's summer X Games. We can see why, because like this picture shows, Bob epitomizes skateboarding and progression with his innovative switch stance skill in vert and Big Air. At the X Games 16 last year, Bob scored a huge win on the mega rail, adding to the 17 Summer X Games medals he'd already been awarded. However, so far he has not been as lucky this year, ending up with a left heel cruise from an fs 9 attempt, a sprained right MCL from a new ramp  bail, and a torn labrum left and right shoulder. But at least he got this sick photo of himself against the downtown L.A. skyline. We wish Bob better luck on the upcoming events he will be competing in!