As L.A. prepares for Carmageddon, the July 16-17 closure of a crucial section of the beloved 405, city officials are reacting with the same poise you'd expect when the zombie apocalypse hits, urging residents to flee the city, stay home, and not to, under any circumstances, thow a lavish Beverly Hills estate wedding when the bride's whole family lives in the Valley.

Wait, what was that last one again? Shiiiiiiiiiiit.

Meet Jordan Barbakow and his fiancée, Cristina Morales, who just learned a very important lesson about the dangers of planning anything too far in advance. The short version: Jordan proposed a year ago, and they decided they wanted to have the wedding on the anniversary of their engagement—July 16. Because they had guests coming from other countries, they got on top of it, reserving a swanky Beverly Hills estate, printing invitations, putting down deposits left and right, and planning a scenic 100-person convoy drive up to Santa Barbara after the ceremony. OK, I made the last part up, but it's basically the only way they could be more boned.

Now, they're expecting countless delays, no-shows, and even more money down the drain, as they're going to have to subsidize a lot of extra hotel rooms and altered travel plans due to the impending unprecedented logical nightmare expected for the same weekend of their nuptials [See: "Car-mageddon: L.A. Officials Issue Truly "Nightmarish" Warnings For 405 Closure, Suggest Leaving Town"]. The bride's family, the ABC story reports, is going to have to leave hours ahead of schedule just to drive the measly 5 miles to Beverly Hills. 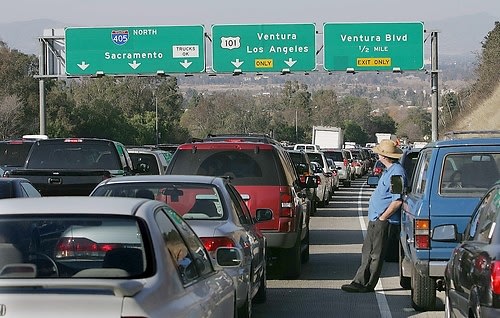 Now, the news report paints a sympathetic portrait of best laid plans gone awry, but I'm not as convinced. An event as catastrophic as Carmageddon doesn't happen without serious warning signs. Didn't they check their astrological charts? I picture them sitting at the kitchen table, drawing up the invite list, when they suddenly hear a series of loud noises outside. They go out to check, and lying on their front lawn are thousands of dead birds, as if they simply fell from the sky.

"Jordan," Cristina says, "I'm scared. What does this mean?"

"It's nothing," Jordan replies, burying deep his own unease. "I've read about things like this, they were probably hit by lightning or something. Just call Animal Control, they'll deal with it."

"But Jordan, what if this is a sign? What if our wedding date is cursed?"

He laughs. "Cursed? Baby, there's no such thing. We're getting married in one of the nicest, safest towns in the entire world. What could possibly go wrong?"

She's quiet for a moment. "Well," she finally says, in a small whisper, "what if the whole 405 gets shut down?"

"The 405? The busiest Freeway in the entire country?" He pats her head. She's always hated when he does that. It makes her feel somehow less than, as if he doesn't think of her as an equal. Sometimes, she wonders if what he thinks of as love is really that, or if his need to be smart, to be right, will always come first.

And she can't stop looking at the birds, eyes frozen open, wings and legs twisted against the pavement. It's like they're staring right at her, right through Cristina Morales, the attractive, confident young career woman. The birds know it, she thinks, and I know it, why can't he see that something is terribly wrong here?

She almost wishes the 405 would close that weekend. Just so he could finally be wrong about something. She knows she shouldn't think that way. But it's too late.